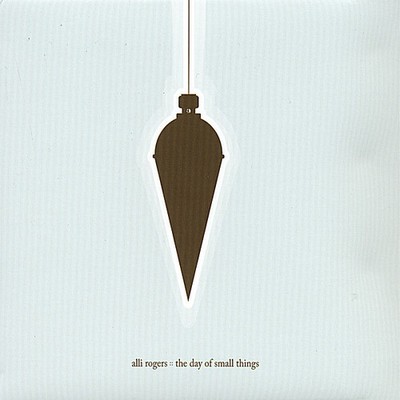 We live in a world that focuses on the grand things in life, where bigger always seems to be better. But as Alli Rogers shares in her sophomore release, The Day Of Small Things, there is beauty and purpose in even what seems to be the most mundane issues we face every day. "It's hard for me to work hard at the small things, the menial tasks, when I can't see the outcome," shares Alli. "I think a lot of people relate to that. When I was looking at the handful of songs I'd been writing, this theme seemed to stand out. The album is about looking past the daily, mundane things and seeing eternal purposes. It worked out well because I had been really inspired by Zechariah 4:10." Taking these struggles and bravely putting them to song brings about the grace that has infused her life and guides the listener to where hope can be found. "I've spent a lot of this past year looking at the big picture and stressing out over everything," admits Alli. "I've had to constantly remind myself that all I have to worry about is today. I've been praying parts of the Lord's Prayer because I have to remind myself daily that I only have to ask for my 'daily bread' and not my yearly bread or even weekly bread." Piloting Alli through the creative process was producer Donnie Boutwell, who shared co-producer credits on Alli's debut album Always Eden. Taking Alli's signature sound and hauntingly beautiful vocals to the next level, they have created an album that is tenderly vulnerable yet strongly rooted in hope, inspiration and grace. The title track outlines perfectly the inspiration behind the album with poignant lyrics like, "You've shown me that we're never alone, and your Spirit will stay by our side. So I won't despise the day of small things." Drawing inspiration from the world around her, Alli slipped into the skin of those in need to share with eloquent verse how we need to shower the love and hope of Christ to all with a song entitled 'Hope'. "When I wrote "Hope' I wasn't personally going through a hard time, but rather the song just emerged. So much was going on throughout the world with the tsunami and hurricanes and I was overwhelmed by how many people need hope. We need to be passionate about bringing hope to people who don't have it, which is the actual definition of poverty. I wanted to write a song that shares that everyone, from the richest of souls to those that are covered in poverty, we all need the hope that is found in Christ." Beginning her musical journey at the tender age of 16, Alli has taken great strides in not only developing her own character and unique sound, but also in drawing from the hardship and joy that life brings to connect and identify with her audience. "I feel like my last album was more introspective. It was a record I needed to make at that stage of my life," shares Alli. "It was more of a searching record and I wrote a lot of the songs when I was going through darker seasons. The Day Of Small Things is a more hopeful record. I've learned a lot over the last year or two and the songs reflect that." With a message of hope deeply engraved in her heart, Alli Rogers is gently opening herself to beautifully express the melody and mission that flows within her. "I want people to listen to the record and be inspired," shares Alli. "I want them to feel hope in the midst of hard days. And I want it to paint pictures of peoples stories-to remind listeners to love others."

Here's what you say about
Alli Rogers - Day of Small Things.