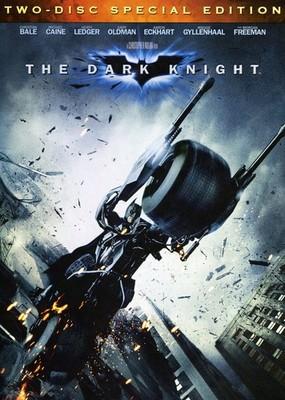 To say that Christopher Nolan's THE DARK KNIGHT is the best comic book adaptation does the film a bit of a disservice. It may be a Batman film, but this isn't a kid-friendly action movie full of the bams and pows of the original series. This is a pitch-black thriller with enough drama and tragedy to please even William Shakespeare, but it will certainly keep both comics fans and uninitiated audiences equally happy. THE DARK KNIGHT starts in the wake of BATMAN BEGINS: With the appearance of Batman (Christian Bale), Gotham City's criminal underworld is unnerved. They're also plagued by the new D.A., Harvey Dent (Aaron Eckhart), who, in his quest for justice, remains above the city's corruption. Enter a new villain, the Joker (Heath Ledger), who wants to unite the criminals for a common purpose: To kill Batman. Director Christopher Nolan Starring Christian Bale, Heath Ledger, Morgan Freeman, Michael Caine, Gary Oldman, Eric Roberts Special Features: Widescreen Audio: Dolby Surround 5.1 - English, French (Dubbed in Quebec), Spanish Subtitles - English, English (SDH), French, Spanish Running Time 153 Minutes.

Here's what you say about
The Dark Knight.