Laurie McClain - Child Behind My Eyes 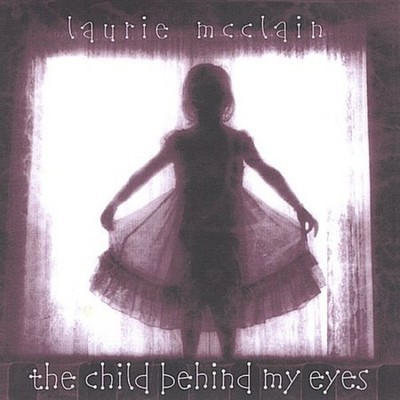 TO BUY THIS CD FROM CDBABY OVER THE PHONE: Just call 1-800-BUY-MY-CD with any major credit or debit card. REVIEWS OF THE CHILD BEHIND MY EYES: 'Whether performing solo or with the excellent band she has put together, she turns each venue into her own living room, and each listener into a new friend with her disarming humor and passionate performance. Laurie's songs explore the themes of identity, growth, friendship and love in a way that always honors the fundamental mysteries of the human journey. In this Mecca of songwriters, she is a gem of uniqueness and authenticity.' - Mike Kearns, Nashville, TN 'What good folk music should be: earthy, truthful, heartfelt . . . Laurie shows listeners her naturally sweetened voice and delightful sense of humor . . . Some songs lament the world's hassles and heartaches; others long for a kinder world where everyone is happy, healthy and free . . . idealistic without becoming preachy.' - Rainbow Rowell, Daily Nebraskan UNL, Lincoln, NE 'Her music cannot be thrown into one single category. It's predominately folk, but under the influence of alternative, country and a touch of blues. Her songs seem to sing themselves with uplifting energy and positive vibrations.' - Maggie Pleskac, DIG Magazine, Lincoln, NE BIOGRAPHY Nashville based singer/songwriter Laurie McClain lived the first 12 years of her life in Los Angeles, and then her family moved to Lincoln, Nebraska. Lonely in her new surroundings, she begged her father for a guitar because she wanted to learn the song 'Suzanne' by Leonard Cohen. Soon she began performing at friends' parties, school events and local open stages. Enchanted by the music of the folk era of the '60s and early '70s, artists like Bob Dylan, Jackson Browne, Joni Mitchell & Neil Young, to name a few, Laurie learned to play hundreds of songs. She was 18 when she wrote her first song. Laurie landed her first paying gig at age 17, at the Freedom Lounge at the Town & Country Motel in Lincoln, Nebraska -- six nights, four sets a night, for $125 a week. Except for a performance at the 1986 Boulder Folk & Bluegrass Festival, she proceeded to play in nearly every bar in Lincoln, Nebraska for the next several years before discovering the folk circuit concert scene in the mid '90s. By then she was a divorced mother of three, so she toured sporadically at first. Then in 1997, Laurie moved with her daughters to Nashville, TN, where she met producer/bass player Charlie Chadwick. He produced her first CD, critically acclaimed The Child Behind My Eyes. Laurie and Charlie fell in love during the making of the album and were married in 2000. Charlie's support and encouragement have enabled Laurie to tour more consistenly, and she is quickly becoming a sought after act on the national folk circuit. Laurie and Charlie co-produced her second CD in 2003, The Trumpet Vine, a stunning tribute to the late Kate Wolf, a brilliant singer/songwriter who passed away in 1985 of leukemia after a short but prolific 10-year recording career. Many wonderful musicians and backup singers contributed to this project, including: Bryan Sutton, Stuart Duncan, Nina Gerber, Pam Tillis, Anne Hills, Donna & Kelly of Still on the Hill, Jerry Rau & Muriel Anderson. Laurie wrote music to one of the songs from some lyrics Kate Wolf had left behind. The Trumpet Vine has received high praise from Dirty Linen magazine, Sing Out! Magazine, Puremusic.com, Singer magazine, Folkscene Radio Show, Folk & Roots magazine (UK), and many other publications. Laurie's recordings are played frequently on the folk and Americana radio stations across the U.S. and in several countries around the world. She is currently in the studio and her next CD, of original material, is due out in the winter of 2005.

Here's what you say about
Laurie McClain - Child Behind My Eyes.