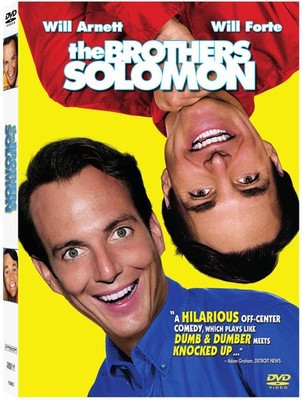 SNL's Will Forte co-writes and stars in this raucous comedy alongside ARRESTED DEVELOPMENT 's Will Arnett. Dean and John Solomon are very close. In fact, they are so close that they live together in a baby-blue apartment, even as adults. Having been home-schooled in the Arctic, the brothers have grown to depend on each other completely, and have been robbed of learning many basic social skills. The men are clueless in the department of romance, and when they discover their beloved father (Lee Majors) is on his deathbed, they suddenly feel the pressure to procreate before he's gone. Determined to make their father proud, they set out to woo a woman into having their baby, hardly grasping the many obstacles that are sure to come their way. Director Bob Odenkirk Star Will Arnett, Will Forte, Chi McBride, Kristen Wiig, Malin Akerman, Jenna Fischer Special Features: Anamorphic Widescreen - 1.85 Audio: Dolby Digital 5.1 - English, French, Portuguese, Spanish, Thai Subtitles - English, French, Korean, Mandarin, Portuguese, Spanish, Thai - Optional Subtitles - English - Closed Captioned Additional Release Materials: Audio Commentary - Will Forte, Will Arnett - Stars Deleted Scenes Featurettes - 1. The Fine Art of Creating a Specimen 2. "Extended Dressing Up Montage" Runtime: 93 minutes Year of Release: 2007.

Here's what you say about
The Brothers Solomon.