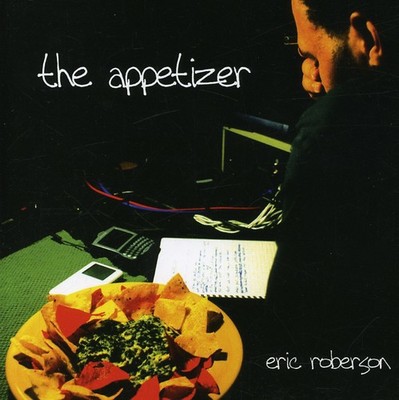 BIO: THE APPETIZER "I called this album "the appetizer" because that is what it is... well that was what it was supposed to be. The plan was to make an E.P. of five songs to satisfy people's hunger, till my album came out next year. Well, I couldn't settle on which five to choose from so I did ten... a range of old and new songs that show my growth, my soul, and my love for honest music. Some may think I'm crazy for doing this, but let me tell you; it is beautiful to own your own destiny and be able to do what you feel in your heart. To have that and not do it? That's crazy to me. Enjoy..." - Eric Roberson Known for his insightful lyrics and soothing vocals, Roberson has cooked up another delightful smorgasbord of tasty "honest music." The menu includes fulfilling vittles, opening with N2U, a fun and satisfying freestyle duet with Marsha Ambrosius, the singing half of popular R&B group Floetry. The delightful, uptempo tune What I Gotta Do is instantly infectious; while the energetic, Chicago-style stepping groove called Hesitation will make you want to hit the dance floor immediately. Erro's ballads are always delectable, and the chosen ones here are no exception. Softest Lips is undoubtedly a mouth-watering gem, while Just A Dream is simply an aural cloud on earth. And The Moon - Eric's well sought-after recording debut - will send you down a fond memory lane of the early 90's new jack swing era. The audible feast gratifyingly concludes with the delectable For Da Love Of Da Game, the result of a spontaneous jam session with fellow indie crooners Raheem DeVaughn and V, when all three were integral members of the A Touch Of Jazz production family. On the production side, in addition to his own work, Eric again worked with Andre Harris, Vidal Davis, Kev Brown, Osunlade, Redhead Kingpin, Jermaine Mobley, and Jeff Townes (more popularly known as DJ Jazzy Jeff) - many of today's most popular producers in Hip-Hop, R&B, and Soul music. This wasn't a move to be associated with the hot producer of the moment, but a component of Roberson's normal modus operandi - working with friends. Friends who happen to be the hot producers of the moment! Backed by an experienced team of family and friends, the New Jersey native has been able to be innovative in his thinking; daring in his choices; and honest with his music. His legions of loyal fans feel the sincerity and repay him with their constant support. Plus, they love his uncanny ability to tell "their" life stories, without knowing them! "There's a void in the industry for honest music and he is filling it. He’s authentic. His songs are everybody’s songs," says one fan after one of his infamously energetic concerts. Review: "If this is an appetizer, we can’t wait until the full meal! Eric Roberson initially put this set together to whet people’s appetite for his next album -- which is still a long way off -- but in doing so, he realized that he had way more tracks than he thought for the original EP, and he decided to release the set as a full album by itself! The set sports 10 tracks in all and like Roberson’s work on the excellent Vault albums, there’s a personal, heartfelt style here that blows away most other male soul singers working today. Each tune is accompanied by some great notes by Eric that let you really get inside his head, and which show why he’s one of the hippest, smartest singers working today."...... Dusty Groove America.

Here's what you say about
Eric Roberson - The Appetizer.