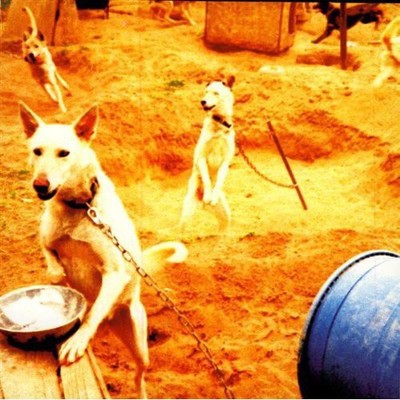 Sons of Freedom come from Vancouver, Canada. Singer, lyricist, guitarist and eccentric NEWTON was introduced to kill-on- command rhythm section of BINNS & SHORT by HARRISON, rhythm guitarist without peer in Canada. And thus begun an unholy marriage, that took place in the boiler room of an underground parking lot. This was 1987 and there was only one way to make your presence felt, so the smaller local clubs were subjected to a series of infrequent but punishing shows. In order to achieve their signature sound, the Sons played their instruments at an un-conscionable volume, rendering even the hardiest club-goers damn near insensate. Word spread quickly around the local music cognoscenti that there was something incredibly heavy, but totally tuneful crawling up from the gutter. Soon the band got it on tape.. The initial 8-track demos brought the labels calling instantly and before the band had played a show outside of Vancouver, they were signed to Slash Records in L.A. The self-titled debut album featured a provocative slogan from Canadian anarcho-feminist Nellie McClung ('Never retract, retreat, never apologise... get the thing done and let them howl') and some equally provocative music. Producer Matt Wallace (Faith No More, Replacements) brought out the band's songwriting talent through layers of overdriven guitar and bass. The NME called it 'a mad dog of a record nobody should ignore'. Melody Maker said 'absolutely sublime... when we say it's been a good year for rock, what we mean is that each week throws up another album of this quality.' 'Tex' Kicking off with a true Sons of Freedom stomper, 'Walkie Talkie' illustrates the ultra-heavy rhythmic approach that sets jaws dropping whenever the Sons crank it up. Once the listener has been suitably bludgeoned, the next 4 songs offer a little breather. 'Hit It' & 'Heaven' find the Sons at the peak of their pop sensibility, intriguing lyrics floating in an ocean of hefty hooks and powerful rhythms testimony to the band's under-rated songwriting abilities. In the midst of the new songs are a pair of Sons chestnuts, now deemed safe for public consumption. Both 'Blind Children' - the first song ever recorded by the group - and 'I'm Burning', come from earlier sessions, but they sound perfectly at home beside the new material. Two more tracks worthy of note are the tone-poem, 'Underneath Yer Window' a navel gazer's wet dream and the frantic 'Wrong Direction' with it's Helter Skelter intro and break- neck pace guaranteed to build a mosh pit anywhere, anytime.

Here's what you say about
Sons of Freedom - Tex.