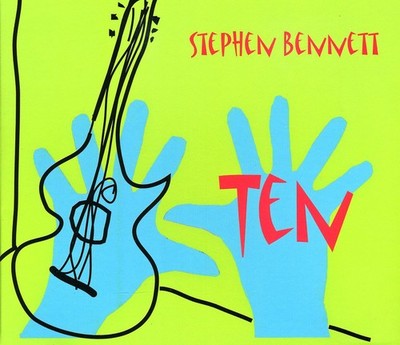 So, What's Unique about Stephen Bennett? The testimony of concert-goers is that his work is the product of both mind and heart, intellectually challenging and emotionally satisfying - - and it is deeply personal, even as it is universal. Listeners have a feeling that they have stepped into the world of the musician, and for a short moment in time, there are only the two of them there. Says reviewer Kim Korman Brown, with the World Community Network in Norfolk, Virginia, 'With his ear near the body of the harp guitar, Mr. Bennett gave the impression of a father cradling a newborn baby . . . His performance was imbued with heart and grace.' Joe Morgan, producer of a Texas Guitar Festival, writes, 'His music . . . draws the listener in. He has the ability to make you feel as though you are a part of the music he is making. There are many amazing guitar players that are not able to make that statement. . . . he's also one of the nicest people I've ever known. That comes through in his music as well.' Stephen Bennett was born in Oregon, grew up in New York and has lived in Virginia with his family for the better part of the last three decades. Since his 1987 win at the National Flatpicking Championship in Winfield, Kansas (The Walnut Valley Festival), he has become known as a versatile and original guitarist who consistently garners critical praise and audience enthusiasm for his recordings and live performances. With his stellar musicianship, a relaxed stage presence and quick wit, Stephen has performed throughout the United States, as well as in France, England, Italy, Sweden, Germany, Holland, Australia, New Zealand, and Japan. He has appeared on A Prairie Home Companion. With fifteen self-produced CD recordings to his credit at this writing, a new Stephen Bennett recording is probably in the works. Aside from his work on the six-string guitar and National steel, Stephen is also one of the world's premiere performers on the Harp Guitar, an instrument he inherited from his great-grandfather. As a composer and arranger, he has created an enduring repertoire and a significant body of recorded work for this instrument. He organized and hosted the worlds first harp guitar convention the Harp Guitar Gathering held November 2003 in Williamsburg, Virginia.

Here's what you say about
Stephen Bennett - Ten.