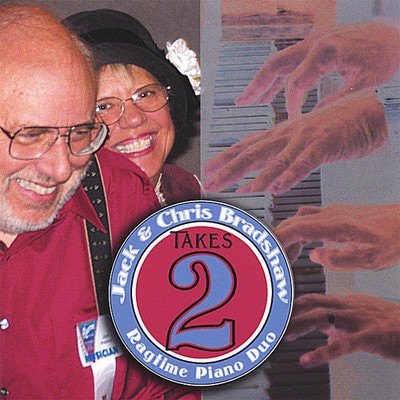 Notes: The Bradshaws' "Takes Two" is their first CD. As they wend their way through Jack's arrangements in various ragtime styles, the sound they produce ranges from sprightly, crisp and clean, to full and luscious, reminiscent of a player piano. With 21 tracks of toe-tapping, lively selections, this CD is a joy-ride through 100 years of ragtime piano music. Review: The Bradshaw's "Takes Two" A Splendid Debut By Nan Bostick Gilroy's Chris and Jack Bradshaw are in trouble now. They've just released "Takes Two," their first CD, and it's so terrific, they'll have a heck of time matching their effort on their next CD. Jack's four-hand arrangements totally shine. Their precision playing and double-the-pleasure styling is spot-on. And though they recorded this must-have CD in their home, they involved a nephew for the mixing and mastering. Result -- a studio quality sound that passes my fidelity criteria (and I'm real picky about that). Their beautiful Steinway actually sounds like a beautiful Steinway. The balance between Chris at the lower end and Jack on treble is perfect. Best of all, the two sound as if they're having the time of their life playing each piece. "Takes Two" is plain fun listening, a CD you'll want to hear over and over. The Bradshaws provide a wonderful variety of styles and tunes, classic rags, of course, and some familiar compositions, but also rarely heard and brand new pieces, all played with great gusto and sensitivity. Several really stand out. For example, after presenting Scott Joplin's "March Majestic" as written in straight 6/8 tempo, they offer up Jack's ragged 2/4 arrangement of the piece. It's an absolute delight (sounds quite natural that way, too). This is followed by two deliciously interpreted cakewalks, "Coon Hollow Capers" and "Possum and Taters," and next you're sitting up wondering "Hey, what a cute, Coney Island kind of tune. What is it?" It's "South Valley Rag," one of Chris Bradshaw's creations originally penned in 2003 as a violin ensemble for the South Valley Suzuki String Academy of Gilroy. It's a stand out. Right after comes another: "Gloria," a 1923 Fred Hager novelty piece. In addition to being a delightful, lilting composition, this is one of several cuts on the CD that have a scintillating music-box flavor with melodies played at mid-range and high treble simultaneously or in counterpoint, all due to Jack's amazing talents as an arranger. Other knockout examples of this unusual music-box feel are their smashing rendition of Luckeyth Roberts "Music Box" and their brilliant romp through Galen Wilkes' "Sedalia Stomp." Later they present another Wilkes' original: "Cakewalking Through Kansas" which is played and arranged so well, you forget you're not listening to an entire orchestra. Ditto on Lampe's "Creole Belles." Right in the middle of all these delights, they toss in a ragtime-era Argentine tango, "El Chiquito," providing a restful change of pace before indulging in "Sundaes at the Emporium," another Chris Bradshaw original inspired by the ragtime doings at Sutter Creek's Ice Cream Emporium. (Pretty durn sweet for something without any calories.) Naturally, I'm partial to the two numbers they included (thanks, guys!) by my great uncle: "Margery," his first of many march/two-steps and "Hiawatha." The latter is the only piece played from a published four-hand ragtime era arrangement. It's pleasant enough but barely holds a candle to the superb Bradshaw arrangements on the rest of the CD. "Take Two" ends with a lovely and haunting interpretation of Wm. Christopher O'Hare's cakewalk "Cottonfield Capers." It's minor tones and high-stepping trio chords are particularly suited for a closing number. A nice "farewell" but frankly, I wasn't ready for it to be over, so I hit replay and ran through tracks 1 through 21 repeatedly. Six hours later I'd completed my drive to Los Angeles and still didn't want to stop hearing it. Great job, Chris and Jack. Congratulations. About the Artists: Jack and Chris Bradshaw began playing ragtime together in the Spring of 2004, after retiring from careers in software (Jack) and education (Chris.) With time on their hands and with an avid interest in music, the race to the piano would often end in a tie. That was when the idea occurred to them that perhaps they could actually share the bench. The rest is history. Since then they have appeared in many ragtime festivals including the Scott Joplin, Blind Boone, Sutter Creek, RagFest, Fresno Flats, Cascade, Shaniko, and West Coast Ragtime Society festivals. They have also performed at the Ragtime Corner of the Sacramento Jazz Jubilee, the Old Town Music Hall in El Segundo, and have given many concerts as well as programs for schools, libraries and other non-profit organizations. Jack often rounds out their programs with classic and new ragtime solos. They both enjoy performing ragtime and have become interested in ragtime history. The Bradshaws are members of the Sacramento and West Coast Ragtime Societies. Chris is a member of the American Guild of Organists. Both are classically trained and hold masters degrees in music -- Jack in piano from Northwestern University, and Chris in organ performance from The University of Iowa. Both Jack and Chris have taught music at the college level.

Here's what you say about
Jack & Chris Bradshaw - Takes Two.