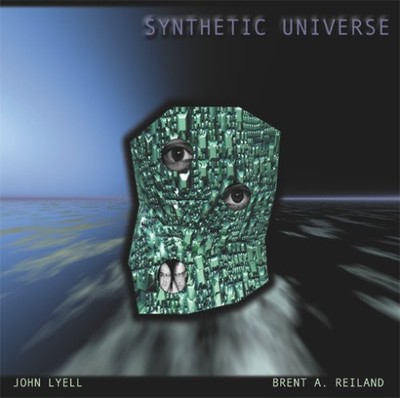 'Synthetic Universe' is an instrumental synthesizer based Ambient Electronic, Film, and Space Music mix that was Composed, Performed, Engineered and Produced at their own project studios in Minneapolis, MN. It is the long awaited follow up CD to their 1998 debut 'Wormholes.' Longtime friends Brent Reiland and John Lyell have traveled similar paths to stand where they do today. Between these two talented young composers/musicians, they have studied almost every major instrument as well as composition in almost every musical genre. With over a decade of friendship, creativity and performance, they are now partners in their own record label (Solar Wind Productions) based out of Minneapolis, MN. John Lyell - After a decade of studio work performing, writing and recording with numerous rock bands (Sweet Mary, Vendetta) in Los Angeles, California and Minnesota, Lyell decided to pursue a different avenue where he could utilize his talent for writing and performing instrumental music. Lyell has settled comfortably into the new age genre. From his studio in Minnesota, he writes, produces and engineers thought provoking New Age, Ambient Electronic, Space, Film and Psychedelic Rock music. Brent Reiland - Over the last 20 years, Reiland has written music in almost every genre-rock, blues/jazz, folk, pop, easy listening, psychedelic, classical and new age. Reiland has studied music and theory at the collegiate level and is most comfortable performing on guitar, piano and keyboard instruments. Working from his Minnesota based studio, Reiland likes to incorporate his interests in astronomy, photography, art, astrophysics and the supernatural into his new age music projects.

Here's what you say about
John Lyell - Synthetic Universe.