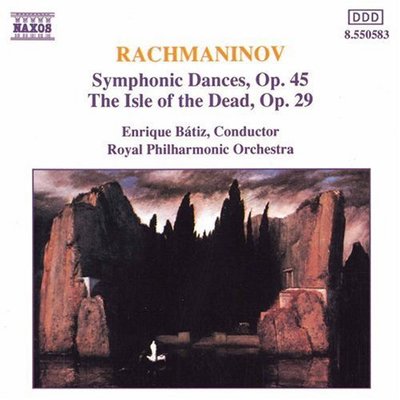 In the years before the revolution of 1917 and his departure abroad, Rachmaninov was earning himself a significant reputation as a conductor and composer, as well as in the role of pianist. The second of his three symphonies was completed in 1907, followed in 1909 by the symphonic poem Die Toteninsel, the Isle of the Dead. The latter was based on a well-known painting, or rather a black-and-white reproduction of a painting, by the Swiss-German artist Arnold Boecklin, the leading German Romantic painter of the late nineteenth century. The picture shows Charon, the ferryman of the dead of Greek mythology, who rows the dead across the River Styx on their journey to the Underworld and to the crags and cliffs of the ominous Island of the Dead of Boecklin's imagination. In the symphonic poem Rachmaninov makes constant use of fragments of the traditional plainchant Dies irae, a hymn that for centuries had formed part of the Catholic Requiem Mass and had inevitable associations with death in the minds of it's hearers, associations exploited by Berlioz and Liszt among others in the nineteenth century, and elsewhere by Rachmaninov himself, notably in the popular Rhapsody on a Theme of Paganini. Here the listener may imagine Charon rowing his boat with it's passengers across to the Toteninsel, their arrival provoking a musical climax. As Charon returns to the hither shore, the music subsides once more into the ghostly stillness with which it had begun. Enrique Bátiz The distinguished Mexican conductor Enrique Bátiz has enjoyed considerable international success, with performances in England, Germany, South America and in North America at the New York Carnegie Hall and Baltimore Opera. At Carnegie Hall he directed a gala concert celebrating the centenary of the concert hall, in homage to Leonard Bernstein, and in Baltimore a production of Carmen greeted with considerable critical enthusiasm. Enrique Bátiz has conducted over 125 different orchestras. From 1983 to 1989 he was Musical Director of the Mexico City Philharmonic Orchestra, preceded by a period from 1971 to 1983 as director of the Mexican State Symphony Orchestra, a position he resumed in 1990. Since 1984 he has been Principal Guest Conductor of the Royal Philharmonic Orchestra of London. Born in 1942, Enrique Bátiz made his first public appearance as a pianist at the age of five. He studied at the Methodist University in Dallas and at the Juilliard School in New York, followed by further study in Warsaw, where he discovered his true vocation as a conductor.

Here's what you say about
S. Rachmaninoff - Symphonic Dances / Isle of the Dead.