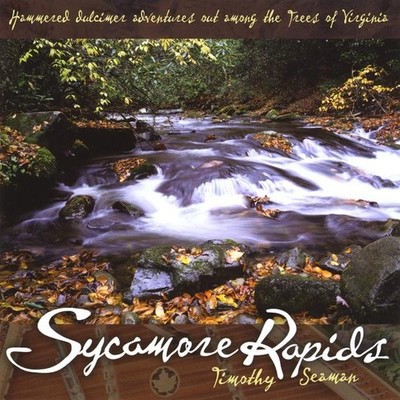 Acoustic soloist Timothy Seaman, a proud native of West Virginia, has lived in Virginia since 1956 and in Williamsburg since 1970. An English graduate of the College of William & Mary, a four-summer backpacking instructor as a Philmont Ranger, and a veteran of nineteen years of school teaching, he has continually been involved in music and has made it his sole endeavor since 1994. Most of his many recordings have been done in collaboration with Virginia's National and State Parks and other agencies, representing their natural and historic themes. His musical achievements have also involved partnerships with guitarists and Celtic harpers in a folk-jazz-classical blend of styles -- with Paul Montgomery in the early '70's, with Hallett Hullinger and his wife Rowena for a decade in the trio Springs of Joy, with Chuck Haas in Pilgrim and Midwinter Spring, and currently with, Ardie Boggs, Ann Robinson, Phillip Skeens and Peter Budnikas in Celtic Awakening, Virginia Sky, and StringWind. Major recordings include To the King (1978), with Springs of Joy, and Scratch the Sky (1990), with Midwinter Spring, as well as fourteen discs currently available, totaling 95,000 copies made. Equally at home on a concert stage, at a reception, in a studio or a classroom, Timothy plays the hammered dulcimer, a large collection of flutes and whistles, bowed and plucked psalteries, mountain dulcimer and guitar -- both solo and in ensembles -- with a unique emotive and sometimes powerful style revealing influences of such varied players as Ken Kolodner, early John McCutcheon, Paul Sullivan, Glenn Gould, Hubert Laws, Arthur Rubinstein, Helmuth Rilling, Rudolf Serkin, Alasdair Fraser and George Szell. The instruments seem at times to burst forth into a vocal form of expression -- and indeed on occasion his baritone voice's warmth joins in. Mr. Seaman's performance log includes dates with the Virginia delegates and governors and U.S. Congressmen; Lady Thatcher; concert stages shared with Pierce Pettis, Robin and Linda Williams, Phil Keaggy, Dean Shostak, Bob Zentz, John Turner, and Mike Seeger; the Waterford Fair; the Augusta Heritage Festival; eighteen First Nights in several cities; the Mordecai Outcry in Lafayette Park, D.C.; An Occasion for the Arts; the Trellis Restaurant and Williamsburg Inn; guest appearances on public radio programs; locations in Hungary, the Netherlands, and Germany; numerous concerts for Colonial Williamsburg and State and National Parks; collaborative programs with hiking author Jeff Alt and wood artist Bob Lentz; and an invitation to play for the elder President Bush. Current works in progress include a disc of Celtic airs called Wild Mountain Thyme and a compilation of Celtic airs for babies; discs for Grand Teton National Park in Wyoming and Chincoteague National Wildlife Refuge, a compilation for Seneca Rocks National Recreation Area in West Virginia, and a recording for the Grand Circle of parks of the Southwest; a solo hammered dulcimer album of folk hymns called Loving Kindness, plus one of Baroque interpretations, a book of folk hymns compiled in lead-sheet form called What Wondrous Love; a suite of compositions called Trees of the West, recordings for Rocky Mountain National Park in Colorado and the White Mountains of New Hampshire; and a quiet recording Hymns from Childhood.

Here's what you say about
Timothy Seaman - Sycamore Rapids.