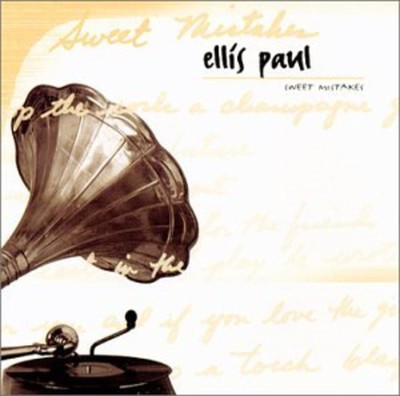 'Ellis Paul is a master storyteller. He combines the sensibilities of Bob Dylan, Bill Morrissey and John Gorka and delivers it with a passion that sets him apart in the company of a new breed of songwriters.' - Performing Songwriter Magazine INFUSED WITH HARDBALL HONESTY AND TELLING DETAILS, Ellis Paul's songs merge big ideas with incidental moments. As a rising star in the songwriting world, Ellis is well known for his passionate, yet literate character sketches that strike at the heart of the human condition. His latest album, SWEET MISTAKES, features 11 new tracks and one remix of Ellis' most recent writing treasures. Ellis' expanding audience has grown even further since the title track from the album... 'Sweet Mistakes' was chosen by the Farrelly Brothers (Dumb and Dumber, There's Something About Mary) for their new Shallow Hal film starring Gwyneth Paltrow and Jack Black (20th Century Fox). The Shallow Hal soundtrack includes Ellis Paul in the company of such artists as: Sheryl Crow, Shelby Lynne, PJ Harvey, Lucinda Williams and Neil Young. The movie premiered on November 9th with over $23 million in sales the first week out. Last year, Ellis' song 'The World Ain't Slowin' Down' from Translucent Soul, was featured in the Farrelly Brothers' blockbuster film - Me, Myself, & Irene - starring Jim Carrey and Renee Zellweger. Peter Farrelly, one of the most successful directors in Hollywood, handpicked Ellis' song as the feature song for this film and called Ellis Paul a 'national treasure' in a recent interview. Elektra Records released the Me, Myself & Irene soundtrack featuring Ellis Paul with the Foo Fighters, Smash Mouth, The Offspring, Hootie & The Blowfish and others. Due to the extensive use of Ellis's song in the film, Elektra decided to service the track as a single to radio on the week of the film's release. The film topped the box office charts with a first weekend gross of $24.2 million as the #1 film in America. Ellis was raised in a small town in northern Maine. For generations, his family has earned their living from potato farming. This background has greatly influenced his perception of the modern world in which he now travels. After attending college in Boston on a track scholarship, Ellis began playing his music at various open mikes and was soon selling out clubs on his own. Now he is a nationally known songwriter having graced the stages from Carnegie Hall to the Newport Folk Festival and hundreds of clubs, coffeehouses and festivals nationwide. After years of non-stop touring and writing, Ellis' hard work is paying off. A measure of his success are the 11 Boston Music Awards (in some ways considered the New Hampshire primary of contemporary acoustic music) he has been honored with. Winners are notable because they have risen to the top in one of the most competitive and musically sophisticated regions of the country. While living the troubadour's lifestyle, the applause and accolades have followed him wherever he performs. Ellis won the Kerrville (TX) 'Best New Folk' Award and the Acoustic Underground Competition. USA Today tagged him as a 'Best Bet for Stardom,' and his records have charted in the Top 5 of the CMJ and Gavin Triple-A radio polls. Dirty Linen magazine has called Ellis 'one of contemporary folk music's most influential voices.' Prolific writing is one of the hallmarks of Ellis' musical growth. You would need a longer performance than one voice could sustain to cover his catalog. His 150+ shows each year provide a forum for plenty of new music, and his 7-album discography on Black Wolf and Rounder/Philo Records is just a sample of what Ellis has included on his SWEET MISTAKES release. Ellis displays a unique talent for performing and is a generous caretaker of the growing audiences he never fails to appreciate. He is thoroughly professional, refreshingly innocent, and has the uncanny ability to reach people in ways that meaningfully affect their lives. This is true artistry. Look for a new Rounder/Philo release from Ellis in 2002!

Here's what you say about
Ellis Paul - Sweet Mistakes.