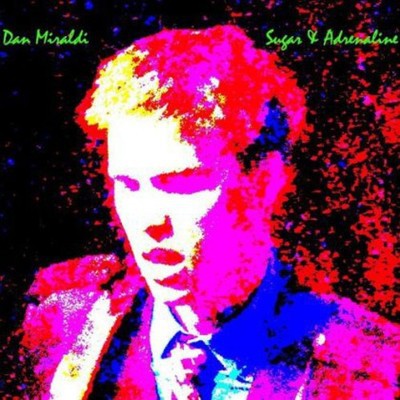 Continuing on a path of artistic growth, rocker Dan Miraldi is back with a jolt of potent new songs, aptly titled Sugar & Adrenaline, set for release July 17 with a CD release show planned for July 12 at House of Blues in Cleveland. Sugar & Adrenaline is a fun album, yet with a bit more emotional depth than Miraldi's previous work. His first LP, Thirsty, is a very romantic album while his next EP, Tease, is more sassy and last year's EP, Rock N Roll Band! Is heavily rooted in the joy of playing rock and roll. Sugar & Adrenaline channels all of those threads while at the same time pulling in some new tricks he learned along the way, and gets it's name from the variety of songs that are either sweet pop songs or "balls-to-the-wall" rockers. Inspired by life's journey and by the people he's encountered along the way, Miraldi tells true stories through his songs that, as he jokes, may wind up "having a healthy dose of fiction." He combines love songs, party songs, songs about starting over and songs with cowboy gunfight showdowns, as well as the token vampire encounter thrown in for good measure. Some tracks were written quickly within the span of fifteen minutes while others took literally years to finish. "Fragments of 'Few Rock Harder' were written over six years until one day last year, I finally saw how they fit together," said Miraldi. Looking at the Rolling Stone's reissued 1978's Some Girls, Miraldi reflected on the effortless transition from genre to genre and kept that example in mind while making Sugar & Adrenaline. "I admire bands that don't make every song sound the same. The trick is to try new things, but also to keep track of one's identity," he said. With a natural knack for melody that his parents claim he had before he was able to speak, Miraldi admits that music has always been instinctive for him. "Singing was natural and it felt really good, so I kept doing it," he said. Personally dubbing his music as "a very eclectic brand of rock and roll," Miraldi has been influenced by rockers such as the Beatles, Dylan, Elvis and the Stones but also admires Ben Kweller, Jack White, The Format, Blink-182 and Green Day. Referring to music as a constant companion, Miraldi uses it in his life to reflect on realities and also to create new ones. Recorded in sessions from November through March, Sugar & Adrenaline features Miraldi's touring band made up of Alex Bowers (lead guitar), Sarah Luffred (drums) and Joe LaGuardia (bass). Recording for Sugar & Adrenaline was done at Danger House Studios in Cleveland by Dave Douglas.

Here's what you say about
Dan Miraldi - Sugar & Adrenaline.