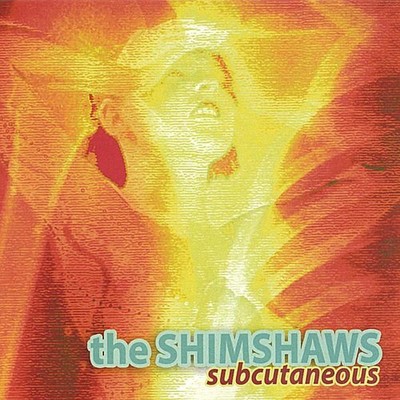 'Subcutaneous', the long awaited debut CD by The Shimshaws, is loaded with well-crafted, melodic pop songs that will put a shimmy in your shake. Written and produced by brothers Todd McCombs and Scott McCombs, the album contains 12 songs filled with lush harmonies, big guitars, a driving beat and hooks galore. Stylistically, The Shimshaws' music ranges from clever pop rock to alternative country to tender ballads, all with a nod and a wink to artists as diverse as the Beatles, the Rolling Stones, Steve Earle, John Hiatt and REM. Give Subcutaneous a listen...The Shimshaws will get under your skin! The Shimshaws, Todd McCombs (vocals, organ, piano) and Scott McCombs (vocals, guitars), recorded Subcutaneous at various Colorado recording studios starting in December 2002. With help from Kevin Lehman (drums & percussion), Paul Rogalski (bass guitar), Jeff Cowles (mandolin) and Cristin Patterson (violin, cello), the album was finished in December 2003 and then mixed by Steve Avedis at Colorado Sound. Steve has worked with artists like Tony Bennett (Gold Record Awarded), Edwin McCain and NSYNC, to name but a few. The CD was mastered by Tom Capek at Colorado Sound. That was then: Todd McCombs and Scott McCombs have written and performed songs together and individually for the last fifteen years. They were members of seminal Washington DC-based band The Quesadas in the early 1990's. The Quesadas recorded three well-received albums and toured the Mid-Atlantic area extensively, including infamous shows at CBGB's in New York City and the original 930 Club in Washington D.C. After a viscous band dispute over whether Miller Lite was 'less filling' or 'tastes great', The Quesadas broke up and Todd and Scott began work on separate writing and recording projects. The brothers joined forces again in 1999 to record the album Good Times Machine. Their band at the time, Those Meddling Kids, soon evolved into The Shimshaws and the McCombs brothers began writing and recording Subcutaneous....the rest, as they say, is history. P.s. Thanks to all of our fans...The Shimshaws love you!

Here's what you say about
Shimshaws - Subcutaneous.