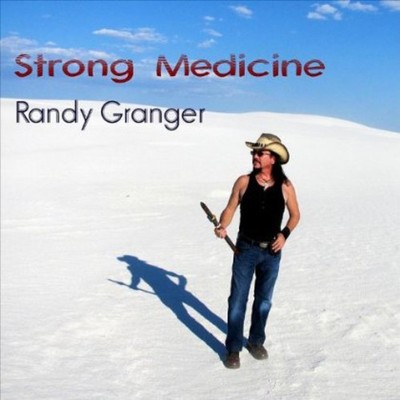 The 'Cathartically Joyous' new offering from Contemporary Southwestern singer-songwriter and multi-instrumentalist Randy Granger. This album was funded using a successful Kickstarter campaign and is Granger's most emotional and personal album to date. Native American and World flutes, world percussion, Pan drums like the Hang from PANArt and Halo from Pantheon Steel, are featured prominently on this album. The songs unfold like a story one to the next. Strong Medicine was born through the experience Granger had of caring for his beloved through pancreatic cancer and ultimate loss. That experience transmuted grief, pain and loss into art and expression of making the personal into the universal. The tracks flow like a story beginning with 'Gratitude' the opening song and moves into 'Dancing Skin' songs that celebrate the good times of a relationship filled with appreciation and love. The title song Strong Medicine begins with the actual recording of a chemotherapy pump that transforms into flutes and Buffalo drums. As he was recording the pump with a digital, hand-held recorder he loved one, a very gifted poet, said, 'You know sweetie, you're going to get some great music out of this. So at least there's a positive side.' That line found it's way into the lyrics, 'The chemo pumps like a drum/You know my thoughts and say/At least my love/You're gonna write some great songs.' The middle songs 'Dragonfly Drummers' 'Awaken Dreamer' explore the feeling that something is wrong with you love's health, an intuitive feeling of dread that Granger actually felt early on months before a diagnosis. 'Strong Medicine' tells the story of driving to M.D. Anderson Cancer clinic in Houston and the gut-wrenching months that followed of fear, treatment, moving, selling a house, buying a house and making arrangements for care, death, hospice and eventually moving through the dark fog of grief and loss while trying to rescue a promising musical career put on hold to care for your beloved and settle an estate in a less than ideal situation. 'Hawk Medicine' and 'Deep Peace to You' speak to the barganing stage of grief searching for a cure, a miracle in spirituality. Granger is known for his spirituality that emanates through his music and is of Mayan and Apache ancestry and connects through that to his music as well. 'Comes the Moon' and 'The Radical Faeries Morphine Drip' speak of the the tension and grueling hospital stays and seeing the affect of drugs and treatment on someone you love as they demise so quickly before your eyes. 'The Nightwatch' and 'Hospital Stairwell Blues' tell the story of how days and nights merge in treatment settings and trying to sleep in a hospital chair staring at the one you love in a hospital bed. Granger would bring his Native American flutes to the hospitals to play for other patients, staff and often in the stairwells where the echo sounds like a canyon. 'Where Did You Go' is the most emotive and personal song on the album. It asks what so many others ask when a loved one dies. In exploring that grief, shock and confusion that follows a loss people report seeing or hearing their loved ones in birds that suddenly appear, in sounds, scents even flowers that suddenly bloom. 'No More Hard Times' the Stephen Foster song is a plea for something to shift that you've learned your lesson through pain and are ready to learn from joy and love. 'Marfa Lights' are about the famous lights of Marfa, Texas where they would drive through on their way back and forth between Houston and Las Cruces, New Mexico for medical appointments. The Rolling Stone's song 'Wild Horses' was a song they would listen to along the drive both being fans of the Stones. The line, 'I watched you suffer/A dull aching pain/Now you've decided/To show me the same' struck a poingant note and the song sings about how 'Wild horses couldn't drag me away' speaking to the devotion and unconditional love it requires to endure caring for someone until the end and beyond. Making the personal into the universal is what art and music is about Granger often says at his shows and in interviews. As an artist Granger knew the experience was be transmuted and transformed into music so kept mental notes and in a way kept his own grief inside until work on the album began where it could be poured into each note and song. Granger is an award-winning performing and recording artist and internationally known Native American flute player. NPR profiled his work on the Hang in a story that ran in 2007 called 'Like Water Over Bells.' He performs and festivals and in concerts around the country and has a popular youtube channel under user name LoneGranger. Along with world flutes, world percussion, guitar and bass, Hammered Dulcimer, Harmonica, Tibetan singing bowls, Tibetan Timsha Finger Cymbals, Cajon, Bodhran, Ocean drum, Tumbek, Bansuri and Native American flutes; Granger returns to singing and much more of the tracks urged on by his fans and radio programmers. A Cello player and singer were brought in for two of the songs. Photographers and artists, also fans of his music, offered their photographs and art for the album artwork. Granger plays all the instruments, multi-tracking and performed in real time. Please leave a review of this album if you wish. Thank you!

Here's what you say about
Randy Granger - Strong Medicine.