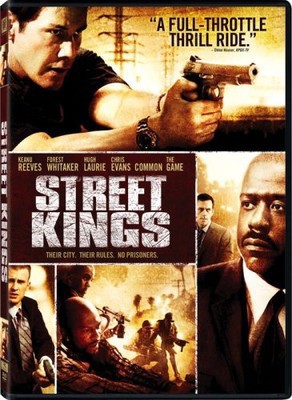 David Ayer, who wrote TRAINING DAY, gives US another unflinching look at disillusionment and questionable decision-making within the ranks of the LAPD. Ayer's second directorial effort tells the story of burnt-out Tom Ludlow (Keanu Reeves), a functioning alcoholic and undisciplined detective with the Special Vice Unit. While so much of this characterization appears resonating familiar at first, we soon learn that the character here has been tweaked. While this loose cannon in no way does things by the book, he is also far from playing by his own rules. Ludlow is relied upon by the other detectives in the unit, and by their almost maniacally ambitious Captain Wander (Forest Whitaker), to go outside the law whenever needed. The infractions he is pressured to commit are quickly and uncomplainingly covered up by Captain Wander, while Ludlow and the rest of Special Vice receive accolades for their high clearance rate. Director: David Ayer Star: Keanu Reeves, Forest Whitaker, Hugh Laurie, Common, Game, Naomie Harris, Jay Mohr, John Corbett, Cedric the Entertainer, Special Features: Widescreen - 2.40 Audio: Dolby Surround 5.1 English Dolby Surround - Spanish, French Subtitles - English, Spanish Optional Running Time: 100 minutes.

Here's what you say about
Street Kings.