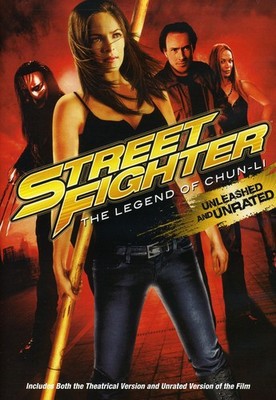 Powerful forces are converging on the streets of Bangkok. They are warriors, some of whom possess extraordinary abilities, all of whom are determined to see their side prevail. Some fight for us; the others for unlimited power. Now, they are preparing for the ultimate battle - of terror versus beauty, light versus darkness, and good versus evil. The forces of darkness are led by Bison (Neal McDonough), a crime boss of seemingly limitless power, and whose past holds a shocking secret. Bison's syndicate, Shadaloo, is taking over the slums of the Thai capital, a task overseen by Balrog (Michael Clarke Duncan), a massively built enforcer and killer. Also in Bison's employ is the assassin Vega (Taboo, of the group the Black Eyed Peas), a masked talon-wielding warrior, whose weapon is tailor-made for slashing and stabbing attacks. Bison's attache is the beautiful but deadly Cantana (Josie Ho). As Bison instigates a wave of violence in the slum districts, grabbing power and land no matter what the costs to it's residents, a team of heroes emerges. Chun-LI (Kristin Kreuk) is a half-Caucasian/half-Asian beauty who gave up a life of privilege to become a street fighter, battling for those who cannot fight for themselves. Her kung fu master, Gen (Robin Shou), once a feared criminal, now fights for the forces of good. Equally determined to stop Bison is Interpol cop Charlie Nash (Chris Klein), who has tracked the crime boss all over the world, and Nash's partner, gangland homicide detective Maya Sunee (Moon Bloodgood).

Here's what you say about
Street Fighter-Legend of Chun-Li.