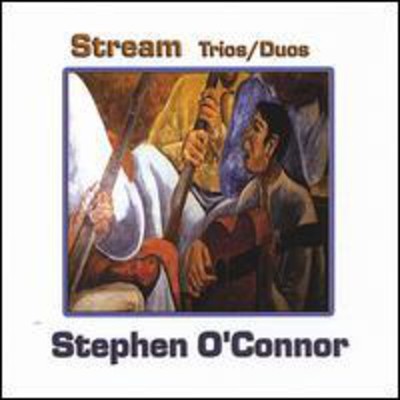 San Diego recording artist Steve O'Connor is well known for not only his masterful jazz guitar work but as a composer, arranger and producer. In 1972 he was awarded the prestigious Down Beat Magazine scholarship for jazz composition and improvisation to Berkeley School of Music where he attended for a time. Steve performed with such luminaries as Red Mitchell, Bob Magnusson, Bob Mover, Jim Plank, Ronny Ogden, The Joe Farrell Big Band with Russell Farrentes and Frank Rosolino, and Joni Summers. He led a jazz group called 'Stream' with renowned bassist Jeff Rew, Ogden, Plank, Magnusson and Joe Marillo. His extraordinary talent in composing led him to writing for Sea World, Universal Studios, Warner Brothers, Disney, the Muppets, the Republic of China, the 1994 Summer Olympics in Atlanta, Seville World's Fair and the Kennedy Space and Rocket Center, commercials for Jeep, Toyota, Chrysler, Folgers Coffee, NBC, etc. One of the more challenging commissions was a suite for five jazz soloists and full orchestra for the San Diego Symphony which featured saxophonists Charles MacPherson and Hollis Gentry, guitarist Peter Sprague among others. He was also commissioned to compose a 'trio' suite for violin, jazz bass and piano featuring Mary Karo, Bob Magnusson and pianist for Ella Fitzgerald, Mike Wofford.'He is a multi-gifted man. His new CD release, Stream- Trios/ Duos, effectively shows why he must be heard by those of us who love good music.' Jude Hibler- Jazz Link Enterprises. (20th Century Guitar Magazine June 2002) 'He's so orchestral. You feel like you are listening to a whole symphony when he plays.' Coral McFarland Thuet- vocalist. 'Stream' features the marvelous bass playing of Jeff Rew. Jeff Claims Woody Herman, Frank Rosolino, Bud Shank, Roger Kellaway and Gary Burton to be among his credits. Also, on drums, the incredibly sensitive Ronny Ogden. Ronny has played with many of the greats, including Mike Wofford, Bob Magnusson and Ron Eschete. 'Stream- Trios/ Duos' is a rich, chocolate soundscape of original compositions and old favorites.

Here's what you say about
Stephen O'Connor - Stream Trios/Duos.