Peter Mayer - Stirrin' Up the Water 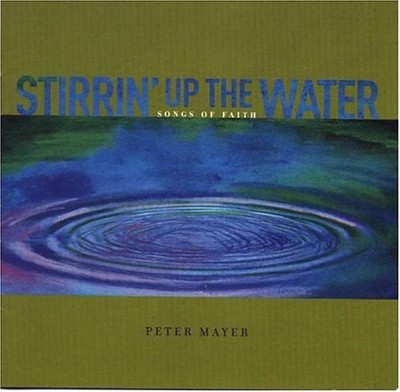 'Stirrin' Up The Water' is the latest release from Peter Mayer. It is a collection of songs of faith written for a world growing smaller and closer, but one that is still splintered and in need of unity. Peter Mayer was born in India, the son of Lutheran missionary parents who moved back to the United States in the turbulent 1960s. Peter and his brother, Jim, formed the band PM in 1985, with drummer Roger Guth, and went on to a signing on Warner Bros. Records. Their first album was titled, 'PM,' and they had success with their first single, 'Piece of Paradise,' which went to #8 on the Billboard Charts, but after the one album, were released from the label. In 1995, PM decided on a hiatus from the constraints of the group, and Peter went on to form the 'Peter Mayer Group,' which included his musical cohorts, Roger Guth and brother Jim Mayer. Peter Mayer had been writing inspirational songs for several years, and in 2002, decided that it was time to collect the songs and record a CD. He chose a sound that is spare, using predominantly acoustic instruments, with a production standard that would leave space for the listener, but one that is inviting and lush, using Native American flute, world percussion, violin, mandolin and guitar. Lyrically, the CD presents songs of faith and inspiration. While finding home in the Christian tradition, the CD makes it apparent that this music, these songs, are meant for anybody, regardless of faith, race and creed that has looked for strength, unity or healing in the spiritual aspects of their life. ''A' is for Angel' talks about a parent's look at his/her growing child and hopes and fears they may have for them. 'Yes I Will' was written for a wedding ceremony, but is a song of love and commitment in any season. 'Stirrin' Up The Water,' the title track, is a song recalling the promise in the ceremony of baptism. Included in the liner notes of the CD jacket is the following message: 'Faith is a gift that calls us to action. Faith is the willingness to keep asking difficult questions in the face of uneasy answers. It is a surrender to a power greater than ourselves. It walks through fear to unlock a door; it humbles and then strengthens; it asks us to look and listen beyond our preoccupations. It is where the champions of peace, community, and social change have begun and sustained their journeys. This is a collection of songs for that journey.'

Here's what you say about
Peter Mayer - Stirrin' Up the Water.