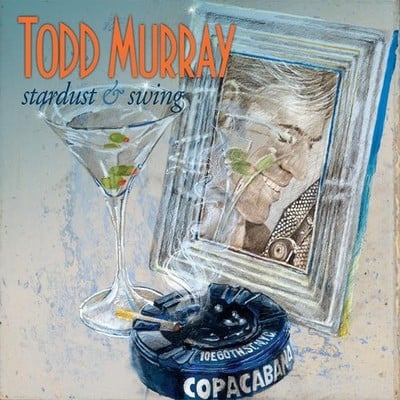 Todd Murray Woos and Wows American Songbook, Originals, Contemporary... (Los Angeles - October 11, 2008) You'll snap and swoon as Todd Murray swings and croons his way through the American songbook. His latest album, "Stardust and Swing," romances the classics from "Dream a Little Dream of Me" to "I Wanna Be Around" to the stellar "Stardust." Recorded in Capitol Record's famed Studio A, "Stardust and Swing" is full of lush brass and string arrangements that bring new meaning to these exciting new renditions of American standards. In addition, Murray offers up a few original pieces as well as duets with guest artists Douglas Sills and the legendary Marilyn Maye. When Murray finished his last album, "When I Sing Low," he began compiling a list of songs that evoked an emotional response in him. "Every time I heard a song that made me feel good...no matter how many times I have heard it over the years, I wrote it down. Before I knew it, I had more than 50 songs on the list," says Murray. "I knew then, I would like to begin working on another album." Before he made his final list, Murray added a few new tunes as well. Murray believes "it's important to sing and foster new songs. There are songs of today that become the American standards of tomorrow. I don't believe 'those were the good old days' or that everything was better in times gone by." In addition, the album provided the opportunity for Murray to work with two of his favorite singers - Marilyn Maye and Douglas Sills. Murray says he always admired Marilyn Maye -- particularly her classic swinging tunes like "Get Me to the Church on Time," "Washington Square," and "The Lamp Is Low." "Her singing makes me feel happy....and there is an irreverence in vocal artistry. I was thrilled when she agreed to do a duet with me on the album" explains Murray. As to working with Broadway star, Douglas Sills, Murray asks: "Who wouldn't want to sing with the best leading man on Broadway?" The only challenge was finding a duet that would highlight both Murray's deep bass-baritone voice and the expressive, emotional quality of Sills'dramatic bari-tenor voice. According to Murray, it was a real challenge. So rather than consider traditional duets, he reinterpreted "If I Ruled The World" as a duet. His unique arrangement feels as if two people were simply talking to each other about the romantic notion of ruling the world. The result is stunningly simple yet dramatically powerful. One of the new tunes on the album is the whimsical "Patricia." Murray wrote the song for his friend,world-renowned chef and writer, Patricia Wells. When Wells asked Murray to sing at her birthday party,he surprised her by writing the song. Murray recalls that she was so overjoyed that her mouth was wide open through the entire song. She now concludes her world-famous cooking classes by playing the song for her students. Garnering much praise, Murray's debut CD, "When I Sing Low," was chosen as one of "Talkin' Broadway's" Top Ten Vocal CDs of 2002. His Los Angeles Cinegrill performances were named LA Weekly's Pick of the Month, and OUT Magazine named him on the "Hot List" for hottest cabaret singer. Murray has performed numerous solo shows, as well as at New York City and Palm Springs Cabaret Conventions at Lincol, and Townhall's "Broadway By The Years 1935." In addition, Todd toured for several years as the bass in John Brack's quartet and soloist in many Zurich based concerts. Murray was part of the first Broadway tour of "The Secret Garden," starred Off-Broadway in NYGASP's "The Gondoliers," and has been seen in several productions at Papermill Playhouse. Most recently, he starred in the leading role in the west coast premiere of the Irving Berlin review "The Melody Lingers On." His rendition of "Why Not Me" can be heard in Charles Busch's major movie release "Die Mommy, Die." There's no mistaking or forgetting Murray's smooth baritone voice and heartfelt regard for every lyric. Whether it's ripping through a blazing-hot big band number like his self-penned "The Girl from Waco" or wrapping his golden cords tenderly around "I Fall in Love Too Easily," Murray knows how to woo and wow an audience and send them away with a swing in their step.

Here's what you say about
Todd Murray - Stardust & Swing.