Jim Photoglo - Sparks in the Radio 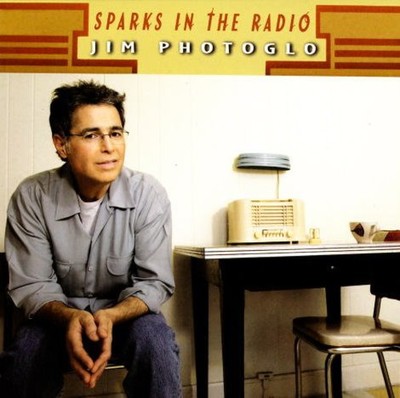 Jim Photoglo's career is as varied as it has been successful, but his love of songwriting and performing acoustically has remained closest to his heart. Jim's musical history is impressive--in the early '80s, he recorded three albums for a major label, opened for The Beach Boys, and toured as a singer/musician with such musical greats as Dan Fogelberg, Vince Gill, Nicolette Larson, Kathy Mattea and Wendy Waldman. It was while on tour with Wendy that she and Jim began writing together. Impressed with Jim's talent, Wendy suggested that he move to Nashville. Jim wisely took her advice to heart resulting in his songs being recorded by legendary artists such as Marty Robbins, The Everly Brothers, Brenda Lee and Dusty Springfield as well as up-and-comers like Travis Tritt, Patty Loveless, and Faith Hill to name a few. Although Jim was experiencing success as a commercial writer, his heart was still in performing, which led him to record two more solo CDs. Soon Jim's inherent sense of humor got the better of him when he founded the group Run C&W with ex-Eagle, Bernie Leadon and Amazing Rhythm Aces leader Russell Smith. Run C&W developed a 'cult' following for their bluegrass versions of classic '60s soul music and recorded two CDs. After Run C&W disbanded, Jim continued writing and performing solo, starting another band with a collection of 'who's who's' from the Nashville studio scene called the Vinyl Kings. Although their forte was to faithfully re-create their favorite '60s rock and soul music on stage, they've recorded two CDs of original Beatle-inspired songs. Jim continues to tour solo, combining songwriter workshops with concerts at colleges, coffee houses and clubs around the country. In the Spring of 2000, he released the critically acclaimed Fly Straight Home on his own Grifftone Records. This year he will debut his latest, Sparks In The Radio.

Here's what you say about
Jim Photoglo - Sparks in the Radio.