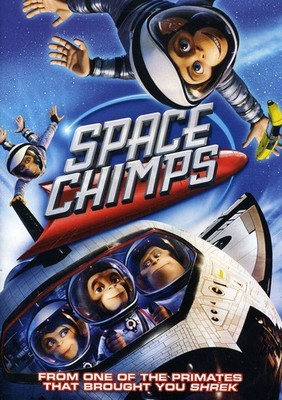 When Ham III, the slacker grandson of NASA's legendary chimpanzee astronaut, is recruited to help retrieve a lost space probe, he has a close encounter of the hilarious kind as he teams up with the lovely Lieutenant Luna and their by-the-book commander, Titan. But when the ship crash-lands on a strange planet, can this mismatched chimp crew work together to save the mission without driving each other bananas? the simian slacker becomes a reluctant hero and learns the true meaning of courage as he and his crewmates risk everything in an effort to save the peaceful inhabitants of a distant planet from an evil dictator. Director Kirk de Micco Voice Kristin Chenoweth, Jeff Daniels, Stanley Tucci, Patrick Warburton, Special Features: Keep Case Checkpoint, Sensormatic Widescreen, 2.35; Full Frame, 1.33 Audio: Dolby Digital 5.1, English Dolby Surround, French, Spanish Subtitles, English, Spanish, Optional Additional Release Material: Featurette, "Fox Movie Channel Presents: Casting Session" Trailers Running Time 81 Minutes.

Here's what you say about
Space Chimps.