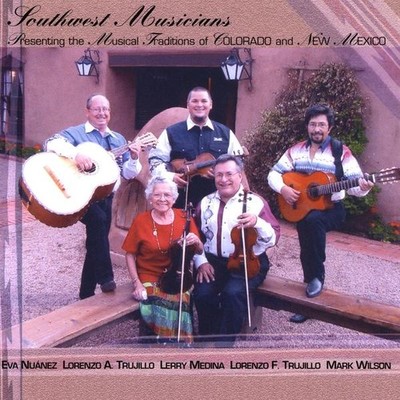 The Southwest Musicians began as a family troupe of three generations with impressive credentials. Since 1976, the group has performed in numerous venues throughout the Southwest United States. As the older generation has retired, new members have joined the group to continue the traditions of the 1840's of Southern Colorado and Northern New Mexico. The members have roots in New Mexico and in Southern Colorado. Their performances have included such venues as: The Chicano Music Festival, The Fort, The Spanish Market, Taos City Auditorium, Santa Fe Fiestas, The San Luis Fiestas, Chile Harvest Festival, Denver Civic Theatre, and many others. The group has released numerous CD's over these years of old-time dance tunes that were popular in the early pre-United States period of Colorado and New Mexico. Their music has been handed down through many generations of family musicians who have taught their music by ear and practice. Dr. Lorenzo Trujillo is the director of the Southwest Musicians. He was awarded the 1996 Governor's Award for Excellence in the Arts, acknowledging his work as a folk violinist, guitarist, and vocalist, among his other accomplishments as a musician, ethnic dancer, folklorist, arts administrator, and culture bearer for approximately four decades. He was awarded funding from the National Endowment for the Arts as a performing artist in 1976 and continues to serve as an advisor and panel member for the NEA. In 2004, he was awarded the Hilos Culturales Distinguished Traditional Folk Artist Premio for his lifetime contributions to the traditional Hispanic traditions of Southern Colorado and New Mexico. Dr. Trujillo has presented hundreds of concerts, lecture demonstrations, and has published extensively in the area of traditional music and dance of the Southwest United States. He has recorded and performed for television, radio and on numerous CDs. His most popular CDs are: Southwest Musicians presenting the traditional music of the Hispanic Southwest, and A Musical Banquet: From Santa Fe to Denver. Dr. Trujillo holds two doctorates: Doctor of Education and Juris Doctor. He is currently the Assistant Dean of Students and Professional Programs at the University of Colorado School of Law. For more information, contact: Dr. Lorenzo A. Trujillo (303) 460-9891.

Here's what you say about
Lorenzo Trujillo - Southwest Musicians: Presenting the Musical Traditi.