Tenzin - Songs to the Silent Moon: Meditations for Solo Pia 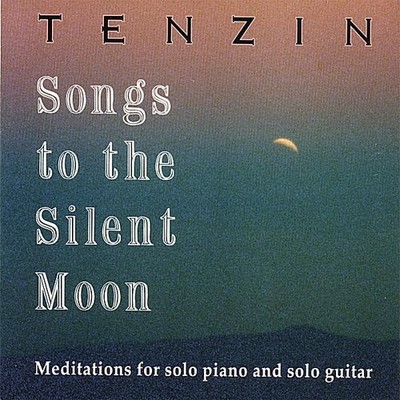 Tenzin's first commercial CD, 'Songs to the Silent Moon,' contains beautiful, relaxing songs performed on solo grand piano and solo acoustic guitar. The opening piece, 'Grand Suite,' consists of five gentle piano compositions that flow effortlessly one into the other. 'Melancholy' is a delicate and moving piano composition. The solo guitar portion of 'Songs to the Silent Moon' begins with 'Starlight Wind,' a song that was composed on the plains of East Africa. 'Samadhi' is music of awakening. 'Triptych' carries the listener through a variety of emotions and soundscapes. This CD is perfectly suited for meditation, relaxation, massage, gentle movement, or as a soundtrack for a peaceful environment. All of the music was composed and performed by Tenzin. The guitar songs were recorded by Tenzin, and the piano recording and CD mastering were done by Bill Barnett, Gung Ho Studio, Eugene, Oregon. Tenzin is a 50-year old musician who composes and performs a wide variety of music on many different string, keyboard, woodwind, percussion, and electronic instruments. He has studied performance practice and composition with many teachers, and holds advanced degrees in music. Tenzin has played in jazz, folk, new age, bluegrass, blues, samba, and rock and roll groups. Many of his electronic compositions have received international performances. Tenzin is an ASCAP composer.

Here's what you say about
Tenzin - Songs to the Silent Moon: Meditations for Solo Pia.