Sylvia Bennett - Songs from the Heart 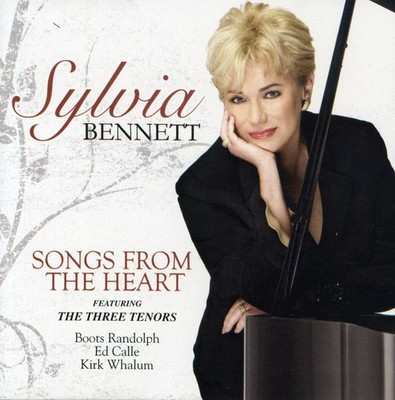 2007 Grammy nominees Kirk Whalum and Ed Calle along with fellow tenor saxophonist, the late, great Boots Randolph are featured on this album of timeless standards starring vocalist Sylvia Bennett. Sylvia Bennett-The Timeless Voice, has been known for her silky smooth voice, clear and bright tone and warm personality. "Songs from the Heart" showcases her soft, romantic side. "It's unplugged, transparent and my soul is exposed" she says. Bennett, herself a Grammy nominee for "Sentimental Journey" with Lionel Hampton, considers it a wonderful honor to have her voice enveloped by some of the finest musicians of our time. It's also a piece of history, says album producer Hal S. Batt of AfterHours Recording Studio. "We're capturing a moment in time that won't happen again between three of the greatest tenor sax players in the world." The three tenors all play on the track "Since I Fell for You." "It's back to real players, back to grass roots. It's organic music, not amplified without synthesizers. The feel is the Blue Note lounge, authentic music...from the heart," producer Hal S. Batt says. "I hope this music touches people in a heartfelt way, which is the way it touches me," Sylvia Bennett says. "I find it uplifting, hopeful, even comforting and it truly expresses how I feel about life." Unfortunately, Boots Randolph, who died in July, 2007, did not get to hear the finished album. His long and distinguished career spanned 40 years and included recordings with Elvis Presley, Roy Orbison, REO Speedwagon, Al Hirt and Jerry Lee Lewis. But he was best known for his own hit "Yakety Sax." Ed Calle received a 2007 Latin Grammy nomination for Best Instrumental Album. The two-time Grammy nominee can also be heard on albums by Frank Sinatra, Vicky Carr, Arturo Sandoval and Jon Secada. Kirk Whalum received his eighth Grammy nomination in 2007, this time for Best Pop Instrumental Album. He has performed worldwide with such notables as Whitney Houston, Babyface, Yolanda Adams, Take 6, Bebe & Cece Winans, Barbara Streisand, Kevin Mahogany, Al Green and Luther Vandross. "Songs from the Heart" percussionist, Sammy Figueroa is a two-time Grammy nominee, including a 2007 Latin Grammy nomination for Latin Jazz Album.

Here's what you say about
Sylvia Bennett - Songs from the Heart.