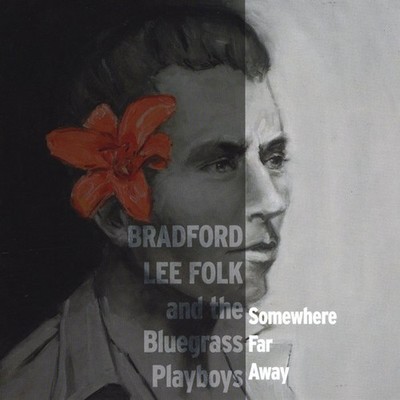 If you want to reach Bradford Lee Folk, call him after two pm, Nashville time. That's because before two o'clock, he's out on his tractor in the fields of an organic farm outside the city, farming for a living. After 2pm, Brad heads back into Nashville to set up for a long night of burning bluegrass and rootsy Americana with his band The Bluegrass Playboys. That juxtaposition between the gritty dirt of the country and the glitz of Nashville lies at the heart of Bradford Lee Folk's music. On his new album, Somewhere Far Away, you can hear the push and pull of the more progressive edges of American roots music against Brad's own love for the rock-hard foundations of bluegrass. It's a paradox you can hear even in the sound of his voice, which moves so easily between a rough-edged drawl and a sweet, crystal-clear, high-lonesome call. Really, it's as simple as this: when Brad sings, you listen. Bradford Lee Folk's lived a hard-driving life in American roots music; the kind of life you find from a man who's not afraid to get his hands dirty. Born in Louisiana and raised in Missouri, Brad's dad played country and blues, and the sounds of old-time stringbands filled his youth. Halfway through high school, though, he found a cassette tape of Flatt & Scruggs, and from then on it was "bluegrass, bluegrass, bluegrass," as he says. After high school, Brad moved to Colorado, worked as a herdsman on a dairy farm, drove to his gigs in a '72 Cadillac Coupe de Ville and formed up his ground-breaking bluegrass band Open Road. With razor-sharp precision, vintage suits and Dapper Dan haircuts, Open Road was the hottest young bluegrass band on the circuit. Signed to Rounder Records, Open Road released three records and toured everywhere before flaming out from the pressures and temptations of being thrown into the touring musician life too young. Afterwards, Folk bought a rural honky-tonk in the foothills of Colorado and kept right on rolling, booking so many hot country roots bands that his bar became a must-stop spot on the national circuit. After five years, Folk packed up and moved to Nashville, looking to return to his own muse in Music City. Now with The Bluegrass Playboys, Brad has a newfound focus on his music and his career, writing most of the songs on his new album, and leading a group of some of the hottest pickers in the city. If you ask Bradford Lee Folk what kind of music he plays, his first answer will always be "bluegrass," though on Somewhere Far Away you'll just as easily hear Americana or country roots influences. Unlike many, he doesn't see bluegrass as a isolated tradition separate from other American musical forms. On Somewhere Far Away, barn-burning bluegrass ("Foolish Game of Love") rubs shoulders with the disquieting darkness of the Americana ballad "Soil and Clay", or a character-driven story song like "The Piper." "Trains Don't Lie" was written about Brad's hard-struck East Nashville neighborhood, but still retains a certain wistfulness, and the title track turns a sleepy waltz into a beautiful meditation on nature and environment. Somewhere Far Away is proof that you can build American roots music that looks to the future as easily as it looks to the past.

Here's what you say about
Bradford Lee Folk & the Bluegrass Playboys - Somewhere Far Away.