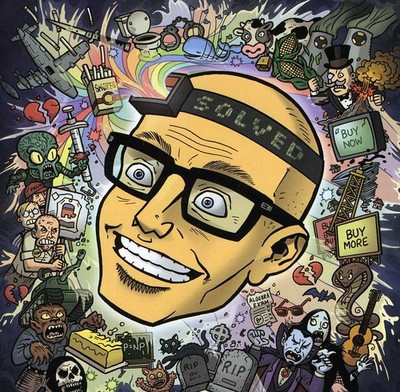 When Damian Hess began recording as MC Frontalot in 2000, there was no category into which his unique brand of alternative hip-hop fit, so he coined and self-applied the term "nerdcore." Since then, a thriving rap subgenre has grown up around him. Falling outside of what the music business considered commercially viable, he pursued marketing and distribution channels then largely unfamiliar to recording artists, embracing the worlds that embraced him, particularly comic books and gaming. Throughout the first decade of his career, Frontalot has found imaginative, visionary, ways of creating and putting forth his music. On Frontalot's fifth studio album, problem-solving is the central theme. He focuses on the music business itself (now "the t-shirt business") in "Captains of Industry," trading rhymes with fellow nerdcore icon MC Lars. In "I'll Form the Head," co-starring Dr. Awkward and ZeaLouS1, Frontalot outlines, and seeks to resolve, an argument between mech pilots. "Invasion of the Not Quite Dead" finds Frontalot, joined by the rock band Wheatus, confronting mortality. In skits between songs, Frontalot seeks solutions from friends who, like Frontalot, are celebrated for extraordinary wit, such as Kristen Schaal, Eugene Mirman and Wyatt Cenac. Even the album's cover art is a characteristically Frontalot collaboration: it is illustrated by underground comics legend Evan Dorkin (Milk and Cheese).

Here's what you say about
Mc Frontalot - Solved.