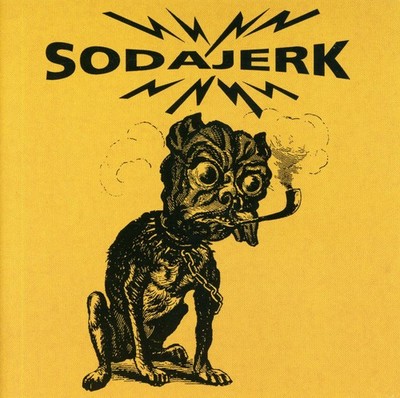 'Sodajerk', the fifth album from Pittsburgh's own Bucky Goldstein and 'Poppa' John Tucker, is the culmination of five years of writing, recording and performing. 'This is the first CD to really capture the essence of a live Jerk show' says 'Poppa' John. Here's what the critics say: 'Not everyone has heard the live sounds of Pittsburgh's reigning champions of city-slicker country and all-purpose drinking music -- Sodajerk, But they're rectifying that...It all starts with the new record.....'---The Tribune Review 'Sodajerk is the roaring hotrod Ford of Pittsburgh bands. They project an image of recklessness that seems so real it just can't be made up. They know heartbreak like most people know their children, and they pack it all in with a country sound that is more like Johnny Cash than Toby Keith. It's hard walking away from a Sodajerk set feeling bad, though. For the most part, the songs are driven by old-fashioned country energy as if the band was an old Briggs and Stratton engine working through some high grass, but their metal roots shine through with jagged rifts that cut to the core. The new, self-titled album will feature more of that side of the band.'---Cranberry Journal 'The brash and punchy roots-rock of Pittsburghs SodaJerk is exactly what you'd expect of a group who hold a strong appreciation for the old-school country (and all the drinking that goes with it) as well as AC/DC and The Replacements. With primary songwriter and guitarist Bucky Goldstein as the key focal point, The Jerk fill out their self-titled fourth release with a sound most like their live performance: guitar heavy, swaggering, somewhat raunchy rock that smells of beer and reeks of a good time. Granted, they've taken on the classic themes inherent in the genre heartaches, loneliness, drinkin, love and law troubles but keep it attractive with a raw, good-natured sound that's always keen with a strong vocal or lead hook. Power drummer Poppa John Tucker takes on a rough growl fronting the power rocker The Ugly Truth, which he co-wrote with Goldstein, whose coarse and weary voice holds a captivatingly stark presence.'---Miles of Music 'Reminiscent of Cracker-meets-Hank Williams country, Soda Jerk's disc "Soda Jerk I" binds rock and country with a combination of taste and style. Frontman Bucky Goldstein's raspy, hard drinkin', whiskey voice in "Breaker Breaker" makes you feel as if you were out drinking with him and that you understand the argument he had with the floor. The guitar work is done in perfect taste while contributing to the overall shuffle rhythm. From track to track, their ability to vary between rock and country is obvious and refreshing.'-----WDVE 102.5 FM 'In one word: delicious! The self titled fifth album from Pittsburgh's alt country/rockabilly mainstay is clever, catchy and fun. A bit Replacements, a tad Pete Yorn, perhaps some Wallflowers and pre-experimental Wilco, SodaJerk smokes through your listening room with a BBQ swagger. Singer Bucky Goldstein's voice has never sounded better! Every one of the originals on this CD are imprinted with SJ's witty lyrics, brilliant guitars, genius bass lines and powerful drumming. 'Dear Disappointed' is a rocker, full of energetic riffs and aggressive vocals. 'Handcuffs' epitomizes SodaJerk's sharp songwriting. 'The Ugly Truth,' with percussionist 'Poppa' John Tucker taking the microphone, will knock you down to size. Song number nine, 'Final Resting Place,' continues this strong rockin' performance into the final third of the album. Definitely grab a copy!'---Music Underground Magazine 'Sodajerk release an incredible album. This is roots rock with a bit of twang country that distinguishes this band from any other. Their songs their music done their way. This album is not overproduced which gives the band a realness to their music that is just fabulous. Soadajerk -remember the name you will be hearing it often.'---Roots Music Report '....their latest, self titled CD is a solid platter of No Depression era Uncle Tupelo worship....'---Stomp and Stammer Magazine 'The self titled Sodajerk album is a strong, confident record that demonstrates one band's restitution to the opressed spirit of country music. Twangier than the Wallflowers and rowdier than the Magnolia Electric Company, Sodajerk write the type of music that makes a night on the town; the type of sound that every jukebox would be lost without. 'Tonight's Gonna Bury You' and Breaker, Breaker' are two standout tracks on an album that rocks from start to finish'---Ryan Hoffer, A&R-Shuteye Records 'Combining elements of honky-tonk, alt-country and early '90s alternative, Sodajerk's gritty songs about drinking and hard times sound like a cross between Lucero and The Pixies. The band's leanings are definitely more towards the country side, but you also can't help but hear various other rock influences thrown in the mix. '---Prick Magazine 'This band, now based in Atlanta, describes itself as The Replacements mixed with Johnny Cash. That sounds about right to me - they have a clean, modern sound that goes outside the box. Songs such as "Final Resting Place" have a more professional sound than your standard bar band, but mercifully are without the cheesy lyrics or production values that currently dominate top-40 radio. This band enters (and wins) a bunch of those contests that are constantly cropping up, even placing in the finals of Jim Beam's National Band Search. They are a favorite opening act of so many top-shelf artists, you've probably already seen them play live.'---Southern Fried Magazine 'Hoo-haw, now this hits the spot. Riff happy Sodajerk crank out hootenanny rock Replacements style: off the cuff, immediate and hook laden. There's a dusty porch alt-country feel to the proceedings, like a giddy Uncle Tupelo with a bit much Rolling Rock bubbling through their veins. Bucky Goldstein has a golden, unmistakable delivery, and a gift of scribbling lines that oughta be etched in stone ('12 bars behind me, 12 more to go, since you've been gone, I've been losing sleep' - ouch). Feel free to place Sodajerk (great name by the way), along with Flat Duo Jets, White Stripes and Black Keys, into the pantheon of rock duos.'---thrust_2.tripod.com.