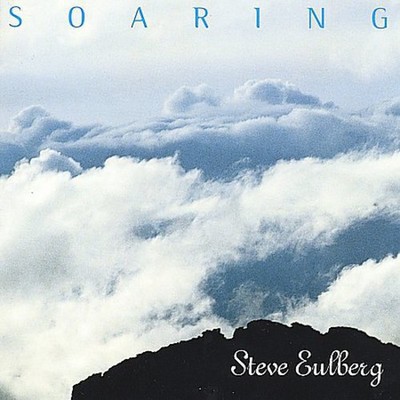 Soaring is the fan-demanded recording that features Steve Eulberg's original and traditional acoustic music woven together by mountain and hammered dulcimers and guitar. He is supported by Northern Colorado musicians, Heather Wegter, Kevin Jones, Mike Moxcey, Carole & Teresa Lundgren and Russ Hopkins. The title track has been chosen for the soundtrack of PBS' show RoadTrip Nation #10 (which aired in the summer of 2005) and for an accompanying DVD! This is Eulberg's 4th solo release on the Owl Mountain Music label. The tracks, 'Uncle Jim's Song' and 'I Am a Pond,' from Soaring have spent 8 and 4 months respectively on the Music Reviews Independent Radio Charts from New York since the album's release in August 2001. Eulberg is a championship caliber instrumentalist (he has won 2nd and 3rd place in the National Mountain Dulcimer Contest (1998 & 2001) and was a finalist in the National Hammered Dulcimer Contest (1999) in Winfield, Kansas. Reviewers say about Soaring, '...spicy guitar work just right, crafting the mellow vocals into a James Taylor house, built with pride. Good CD to brighten a day off even further. -Ben Ohmart, Muses Muse CD Reviews 'Incredible instrumental abilities!' Keith Baker 'Just like Zappa, Eulberg has a sense of humor that comes through in his lyrics. 'Another Winter's Day in Colorado' and 'Orphan Train' are both finely crafted songs that touch the emotions. ...The instrumental work, such as the excellent opening track on Soaring, is a different story-shimmering, clear and clean. Eulberg produces some of the finest acoustic instrumental recordings in the region-a music that goes beyond words.' -Tim Van Schmidt, Riff Magazine 'Very good playing, and very thoughtful songwriting. I resonated with his choice of topics, and appreciated his using music to express these sorrowful and blissful parts of human experience.' --Bonnie Carol, National Dulcimer champion 'Eulberg is a championship-caliber hammered and mountain dulcimer player.' -Dulcimer Players News 'The mountain dulcimer, fiddle and jaw harp work magic on 'Soaring.'' -Wil Owen, Rambles.net.

Here's what you say about
Steve Eulberg - Soaring.