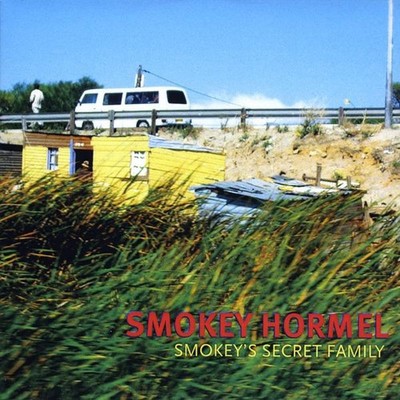 Throughout his 25-year career as a rock guitarist (with Johnny Cash, Beck, Tom Waits, Neil Diamond, and Joe Strummer, among others) Smokey Hormel has simultaneously explored the worlds just beyond rock and roll, delving into the genres that have shaped his style and informed his playing - Western Swing, Blues, Bosso Nova, Samba and now, with Smokey's Secret Family, African popular dance music from the late 1950's and early 1960's. Assembled by Hormel and united by a fondness for a broad spectrum of musical styles, Smokey's Secret Family is a group of musicians who first met and began playing music together at the small, influential New York City club Tonic in the early 2000's. All accomplished in a variety of genres, they are, in addition to Hormel, reed player and multi-instrumentalist Doug Weiselman (Laurie Anderson, Antony and the Johnsons), trombone and tuba player Clark Gayton (Stevie Wonder, Prince, Santana) and Brazilian percussionists Gilmar Gomes (Angelique Kidjo, Meshell N'degeocello) and Mauro Refosco (David Byrne, Bebel Gilberto). The album, which shares the same name as the group of musicians who made it, is a collection of songs mostly by African groups from the 1960's. "It's not the Highlife or Soukous sounds that became popular in the 70s," says Hormel. "I am talking about that magical moment just before the heavy influence of American Soul, Funk and Rock and Roll, the pre-James Brown era of urban African dance music. There are no big drum kits, no loud amplifiers, just wild guitars bursting through small amps afloat on a sea of hand drums and shakers, often with a very distorted bass or maybe even a tuba pulsating underneath it all. It's more Latin than western. It's not Funk. It's Cha Cha, Mambo and Rhumbas, and it all has that very contagious and danceable groove." Smokey Hormel produced Smokey's Secret Family and plays guitars, bass, high 12 string, percussion, harmonica, fiddle, pocket theremin and bass angklung.

Here's what you say about
Smokey Hormel - Smokey's Secret Family.