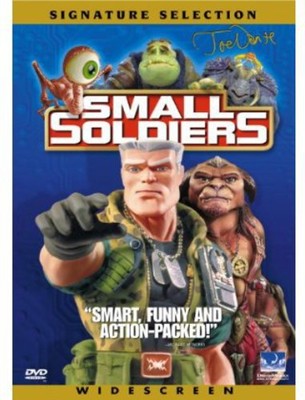 Joe Dante directed this satirical action-comedy about talking tech toys accidentally juiced-up with military microchips. After the defense industry firm Globotech takes over a small toy company, Heartland Play Systems' CEO Gil Mars (Denis Leary) gives the green light to develop a new line of action figures, requesting an upgrade to more realistic figures from Heartland toy designers Larry Benson (Jay Mohr) and fumbling Irwin Wayfair (David Cross). Mars wants toys that act like the ones in TV commercials. The results are fierce fighting figures, the Commando Elite, programmed to seek out and destroy the kindly alien-like Gorgonites. In an effort to make the toys as natural as possible, Benson inserts Globotech's most powerful military computer chips. Meanwhile, in quiet Winslow Corners, Ohio, toy-store owner Stuart Abernathy (Kevin Dunn) and his 15-year-old son Alan (Gregory Smith) are stuck in a failing business, so when Heartland truck driver Joe (Dick Miller) stops by with the Commando and Gorgonite toys, Alan is convinced they will be hot sellers, commenting, "Maybe this store will finally make a little money." with blistering blows to their blister packs, the Commandos burst out, receive orders from their leader Chip Hazard (voice of Tommy Lee Jones) and ready for an all-out assault on the Gorgonites. When the Gorgonite leader Archer (voice of Frank Langella) begins communicating with Alan, it causes the Commandos to perceive humans as another enemy, simply by their association with the "Gorgonite scum," so an attack on the Abernathy house begins. Unfortunately, the Gorgonites can offer only limited assistance, since they have been programmed to lose. The film combines animatronics, puppetry, and computer animation. The Commando Elite voices include surviving actors from Robert Aldrich's the Dirty Dozen (1967), while the Gorgonite voices reunited several This Is Spinal Tap (1983) cast members. A dedication to Phil Hartman (the voice of Phil Fimple) after the closing credits features a brief Hartman outtake.

Here's what you say about
Small Soldiers.