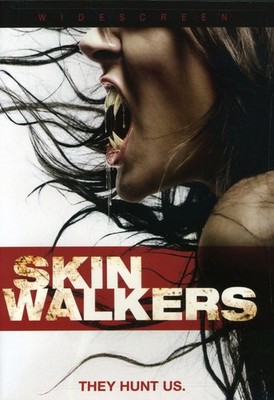 Though a statement at the opening of the film explains that the creatures of the title are, in Native American lore, people who have the ability to transform into various animals, SKINWALKERS focuses on two warring factions of werewolves. One is a family concentrated on protecting Timothy (Matthew Knight), a boy about to turn 13 who is the offspring of mortal Rachel (Rhona Mitra) and a Skinwalker. Timothy's family, led by kindly Uncle Jonas (Elias Koteas), chooses to avoid slaughtering innocents during full moons by restraining themselves in straps in the back of a beaten traveling camper. Their rival clan, attained by Varek (Jason Behr), lives with a leather-clad biker gang, riding from town to town and reveling in their bloodlust. Director James Isaac Star Scott Anderson, Jason Behr, Lyriq Bent, Sarah Carter, Kim Coates, Barbara Gordon, Tom Jackson, Elias Koteas, Matthew Knight, Rhona Mitra Special Features: Widescreen Audio: 5.1 - English Subtitles - English, Spanish Additional Release Material: Audio Commentary - James Isaac - Director Featurettes - 1. The Making of SKINWALKERS 2. a Special Effects Visit with Stan Winston+ Runtime: 110 minutes Year of Release: 2007.