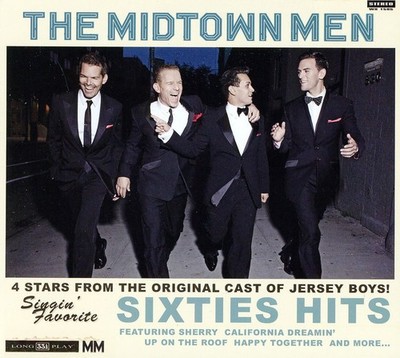 I'll never forget the ?rst time I heard Christian Hoff, Michael Longoria, Daniel Reichard and J. Robert Spencer sing. Because I had the honor of writing the liner notes for the cast album of the Tony-winning musical Jersey Boys, I got a chance to attend the 2005 recording session for this best-selling, Grammy-winning CD. What did I think of these young men and the other members of the original Broadway cast as they recreated the songs of the Four Seasons? Knocked out would be an understatement. These guys weren't just a talented bunch of actors. They were a real singing group, like the ones I loved in the '60s. When the play is over, I thought, they should go out on tour. Well, as we know, the play is not over and may never be over. But after a few years, Christian (with a Tony Award in hand for his part in Jersey Boys), Michael (having put out a solo album Under 1000 Shades of Blue), Daniel (who would play Candide at the New York City Opera) and Bobby (who would earn a Tony nomination for his starring role in Next to Normal) left Jersey Boys to do other things. Yet they could never quite get those infectious Jersey Boys tunes out of their heads. In 2009, as I had hoped and predicted, they got back together as the Midtown Men and hit the road, singing the songs of the Four Seasons and all the other great '60s groups. This new Fab Four became rock stars in their own right. Now they've gone back into the studio to record this fantastic disc, with the Seasons' smashes and also covers of the Beatles, the Drifters, the Mamas and the Papas and even the Zombies, among others. The Midtown Men put their own youthful spin on these ageless songs. They are helping the pop composers of the '60s take their rightful place in the Great American Songbook. I love these guys for keeping my favorite music alive in the 21st Century. And how much do I love this album? It's as good as popping Meet the Beatles on my turntable for the ?rst time! ~ Charles Alexander, long-time senior editor for Time Magazine.

Here's what you say about
Midtown Men - Sixties Hits.