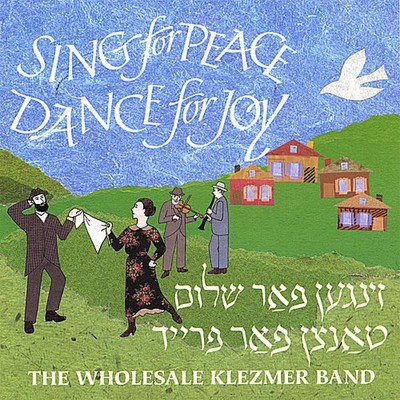 The Wholesale Klezmer Band's approach to performing traditional Ashkenazic Jewish music is to unite elements from the older, European Yiddish melodic style with an ensemble approach modeled on traditional Ashkenazic community prayer style. As in the synagogues of the old country, there is a strong melodic voice, usually the clarinet, leading the group as the cantor would lead the prayers, with other individual voices echoing, anticipating, murmuring in the background, rising and falling with each individual's involvement in the flow of sound. It is a dense style, at times strongly in unison or deeply introspective, at other times almost argumentative, again, very similar to traditional Jewish prayer style. But whether the other voices join, echo, or respond to the leading voice, everything played by each musician is closely tied to the melody itself, as each person's prayers are anchored in the words s/he chants. The Wholesale Klezmer Band performs in Yiddish and Ashkenazic Hebrew, and specializes in making their material accessible to English speakers through translations, stories, explanations, visual aids, and that universal language, the music itself. They write many of their own dance tunes and Yiddish songs that speak to contemporary concerns. It is fitting that the Wholesale Klezmer Band's style should reflect the important Jewish values of community and egalitarianism, since their song repertoire deliberately focuses on other important aspects of Yiddish culture, especially humor, social justice, and tikun olam or the repair of the world. Unlike most working klezmer bands, Wholesale refuses, as a general rule, to perform non-Yiddish material. The effect of this overall grounding of musical elements in the very core of the culture from which they stem is a powerful merging of form and content that is recognized by Jewish and non-Jewish listeners alike. In it's 17-year history, the Wholesale Klezmer Band has grown from a local pick-up group to a professional ensemble bringing vibrant Yiddish music to a wide variety of audiences, young and old, throughout New England and New York state. In addition to performing concerts and workshops for both Jews and non-Jews, Wholesale remains firmly anchored in the Jewish communities it serves, carrying out the traditional function at weddings and bar mitzve celebrations through-out the region. The band has also performed at Carnegie Hall in 1990 and for the Presidential Inauguration of Bill Clinton in 1994.

Here's what you say about
Wholesale Klezmer Band - Sing for Peace Dance for Joy.