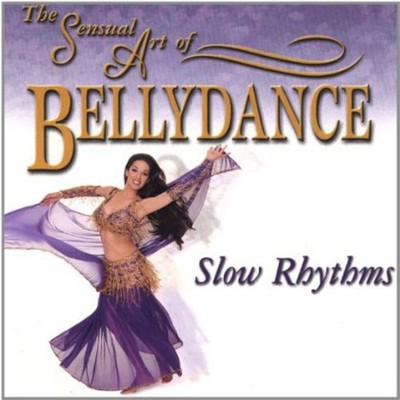 Article taken from 'Santa Cruz Arts Journal,' Fall 2000: These CDs contain music composed by Ron Wagner who is co-director with local dancer/writer Emily Mayne, of the performance company 'Rhythmic Visions.' Ron Wagner has recorded and toured internationally with Ottmar Liebert as well as with a number of major artists, and records on TV and Film soundtracks, including Star Trek and many more. He composes many different types of world fusion music. The two CDs contain the music that Ron created for the instructional videos BELLYDANCE FITNESS FOR BEGINNERS, a four volume set taught by Veena and Neena Bidasha. Although one of the CDs is called Fast Rhythms and the other Slow Rhythms, each contains a mix of different speeds, with a predominance of fast on one and slow on the other. Together they are a rich library of different moods, from slow and sultry to fast and uplifting, with a few really hot drum solos to top it off. It would be hard to pick just one, but the Fast Rhythms CD has everything for a dance workout or to re-mix for a dance party. Slow Rhythms contains beautiful slow pieces that would be excellent background music for yoga or other slow movement. Bellydance teachers will find plenty of material to use for class. There are short pieces that can be used for focused movement and longer pieces for choreography or sustained workouts. Since the music was created for instructional videos, it works perfectly for teaching. Ron is schooled in Arabic classical music and uses various macams (modes) in relation to how they move through melody. They are like Indian ragas, which he also drew from, inspired by Veena and Neena who are half Indian and do a lot of Indian folk dance. His goal was to create a 'Silk Road' feeling. The macams are more than just a scale or mode to use, but rather use specific musical phrases that are associated with the macam in use (as in nahawand, hijaz or bayati). What results from this is a music that is a creative mix. Ron's absolute mastery of rhythm is the backbone throughout both albums. The rhythmic patterns are never rushed and the timing and meter is perfection. Ron's classical training in Indian drumming is evident. Anyone who wishes to practice their Middle Eastern drumming should sit and play along with these CDs. For those who like their Middle Eastern music culturally pure may not be as enthused with this work, but it was never meant to be. It has been described as NEW AGE BELLYDANCE MUSIC. I wouldn't quite agree with that title, since the music is very grounded as opposed to the spaciness of most New Age music. While the orchestration, which relies heavily on synthesizers, may not be completely traditional, neither is it way out there. Ron's use of traditional modalities keeps it consistent with the culture it comes from. In reality, this music is much more approachable to the western ear than the traditional style. The loud braying of zernas can drive some people to leave the room; this is not a good thing when presenting Belly Dance at a restaurant. Native Middle Eastern musicians are also experimenting with new sounds, and new treatments of songs that are generations old. This work is right in there as far as being cutting edge for Bellydancers who want something a little different, but still well within the genre. - G.D. Laney.