Al Williams - See for Yourself 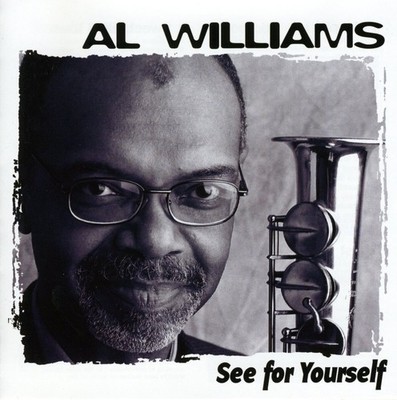 Multi-reed player Al Williams has earned rave reviews from critics and audiences alike for his graceful and melodic style on tenor, alto and soprano saxophones, in addition to alto and C flutes. JAZZTIMES has noted the 'poetic beauty' of his saxophone solos. Dividing his time among his contemporary jazz band Al Williams and Friends, his jazz trio and session work, Al is one of the most highly regarded musicians in the Washington, DC area. AL's 2003 release, See For Yourself, is an upbeat, soulful collection that skillfully combines the talents of SPYRO GYRA bassman Scott Ambush, THIEVERY CORPORATION vocalist Pam Bricker and former Maceo Parker keyboardist Jon Ozment with the amazing skills of composer/arranger John Stoddart. Stoddart displays the depth of his musical gifts with lush orchestrations on the R&B pop ballad 'Who Am I Tryin' to Fool,' featuring jazz festival headliner, Ron Gutierrez. See For Yourself is a hot CD from start to finish. Check out the links on the left to see Al's other CD's, Never Too Late (1997) and Heart Song (2008). AL WILLIAMS - BIOGRAPHY I was born on a New Years Day in the city of Philadelphia. Since I was the first baby born that year, they put my picture in the paper. I was still wrinkled. How embarrassing! It wasn't long before I was being exposed to my older brother's record collection. He liked to play "Ray Charles at Newport" over and over. I still love that record. Philadelphia had the most amazing arts programs in the public schools. Students from Curtis Institute of Music visited weekly as instrumental music teachers. In junior high, I took sax and oboe. Our band director was Mike Natale, who played trumpet on the Mike Douglas Show. You could also study in the evenings or Saturdays at the Settlement School with a member of the Philadelphia Orchestra. The fee was nominal. I took two lessons a week there, studying the bassoon with a wonderful man named Ferdinand Del Negro. With his help I got a small scholarship to attend the Philadelphia Musical Academy (PMA). I had great company there with my high school buddies, drummer Gerry Brown (Return to Forever & Stevie Wonder), bassist John Lee (Eleventh House & Dizzy Gillespie), and Stanley Clarke. If that wasn't crazy enough, former Duke Ellington bassist John Lamb was there to get his teaching degree, and one of his students was a very young Alphonso Johnson (later of Weather Report). Needless to say, our college big band swung to kill! We had Gerry Brown on drums and Duke's bass player, with Stanley Clarke as the alternate bass player. Since everyone around me was seriously into jazz, the bassoon fell by the wayside, and I managed to study the flute for a short time with a wonderful and kind man named John Krell. It was also about that time I became aware of Hubert Laws. He was an amazing inspiration, and he helped me to make the link between classical training and jazz application. It was about that time that I had one of the most inspiring experiences of my young life. Thanks to my friend, Stanley Clarke, I was invited to rehearse with one of the early incarnations of "Return to Forever." The band was Chick Corea, Stanley, Earl Klugh, and Lenny White, with me and Joe Farrell on saxes, flutes, oboe and bassoon. After I got over stark terror, it was an incredible experience. We rehearsed in Chick's parent's basement and Chick's mom cooked dinner for us. Really! As I reflect on it, I see that they weren't supermen. They made mistakes. They were all really nice guys. But above all, they all worked really, really hard. It was a life lesson that I carry with me to this day. After PMA, I auditioned to play with Cuban percussionist Mongo Santamaria. I got the gig and we hit the road. We traveled the US, Canada and South America, recording five albums. Our third record, "Amanacer," won a Grammy for best Latin album. One day I got a call from Stanley asking me to join the "School Days Band." It was a monster. I got a chance to play on stage with people like Jeff Beck and Simon Phillips. I recorded three albums with Stanley, "Modern Man," "I Want to Play for You," and "Stanley Clarke Live, '76, '77." My move to the D.C./Northern Virginia area landed me in a very rich musical environment. I got to tour Japan with The Nighthawks and again with singer Amy Keys. Another highlight was recording a one-hour concert on BET as a member of the Grant Geisman Band. I recorded a movie soundtrack with Nils Lofgren at his home studio and got to play for a period of time with bassist Keeter Betts (Stan Getz & Ella Fitzgerald). These days I find myself playing on a fairly frequent basis with great musician friends like Scott Ambush (Spyro Gyra) and Gary Grainger (John Scofield). Recent concerts have included major jazz festivals in Nashville, TN, and Fez, Morocco. I have recorded three CD's under my own name, "Never Too Late," See for Yourself," and "Heart Song." My latest project "Heart Song" is a continuation of a decade long collaboration and friendship with singer/composer/producer John Stoddart. He is an amazingly talented human being and a great guy. I think it's my best and most radio friendly effort so far. I consider myself to be a lucky and blessed individual to say that I'm a great fan and follower of some of my closest friends. I look forward to experiencing and learning more and about this wonderful human expression of music and the crazy, wonderful people who make it. Ain't it grand?

Here's what you say about
Al Williams - See for Yourself.