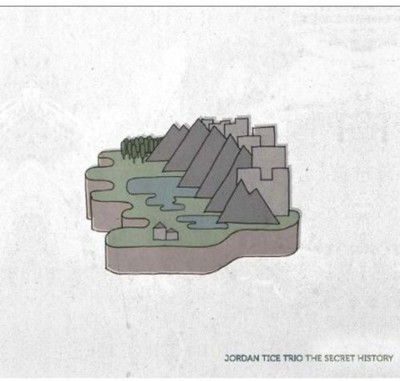 It begins with Jordan Tice, because he wrote the music, and hatched the plan, years ago. Jordan is one of those people for whom the ideas never stop flowing, and who seems to be animated entirely by this flood of mysterious convictions. You can see them moving his limbs, pulling him this way and that, causing his hair to curl, and spilling out through his fingers, the intentions and plans mapping themselves on the fretboard of his guitar. Jordan's plan, the one of which I speak, required specific musical (and other) qualities: thunderous lows, crystalline highs, percussive attacks, voluminous whomps, steady murmurs, driving rhythms, deft dynamics, a constant supply of sarcasm and the ability to bake a mean batch of muffins. So, naturally, he called on his good friends Paul Kowert and Simon Chrisman, who with double bass and hammer dulcimer round out the Jordan Tice Trio. Like all bands, they wanted to sound like one thing, not three. And while they had a head start on this, having known each other, and played together in different configurations, for years, they were excited to get a chance to focus on the trio... sounds rich and rambunctious, lyric and far reaching, headlong and heedful, these all had to be combined. Hours and days of rehearsal time, prized from unyielding calendars and made possible by tireless travel, brought them together in a new way. And so it was that Jordan, Paul and Simon became a band. But where did they come from, and what else do they do with themselves? Ah. All three have been in the business of making sounds, plucking strings with picks, hitting them with sticks, and also throwing bows and fingers into the mix, for quite some time. Paul graduated from the Curtis Institute of Music in 2009, relocated to New York, and has been touring with that five headed hydra of harmony, Punch Brothers (featuring Chris Thile), ever since. You can find his work on the records of artists such as Dierks Bentley, Fiona Apple and Sarah Jarosz. Jordan discovered the guitar at the age of 12, and music has been taking him all over the world ever since then, from Australia to Bulgaria, and to recording sessions and gigs with Mark Shatz, Darol Anger and Frank Wakefield. He now lives in Boston, where he plays, teaches, and writes music, working with groups as varied as the Footworks Percussive Dance Ensemble and Lily Henley's world music band. Simon tours with The Bee Eaters and the Jeremy Kittel Band, has been said to have an unusual, rhythmic style on the hammer dulcimer, and has shared the stage with the likes of Darol Anger and Mike Marshall. Originally hailing from the northwest, he followed his Bee Eater bandmates to Boston four years ago, in his quest to further that strange style and immerse himself in music.

Here's what you say about
Jordan Tice Trio - Secret History.