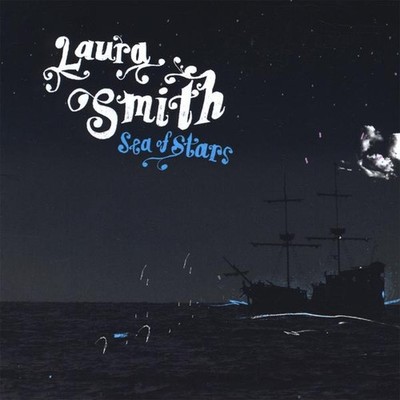 Sea of Stars is Laura Smith's first full-length album. It may seem tough to categorize but it eventually settles somewhere in the genre of indie pop. From cabaret-style accordion, to walls of guitar feedback, to lilting piano ballads, to elated horn sections, Laura and co-producers Andrew Braun and Derek DiFilippo have created an eclectic album, unified by Laura's strong but sweet vocal performances and innate pop sensibility. After humble beginnings as a 'girl with piano' project, Laura Smith has expanded to a full band, including Andrew Braun (guitar), Jeff Riedlinger (bass), and Greg Bevis (drums). The material takes on a new life in live performance and has received rave reviews throughout two Western Canadian tours in 2008. In their short time together, the band has shared the stage with the likes of major label artists Tim Finn (of Crowded House) and Nicole Atkins (Columbia Records), as well as up and comers such as Adaline (Vancouver), The Liptonians (Winnipeg), Colleen Brown (Edmonton), and the 1900's (Chicago). Sea of Stars is currently in rotation on CBC in British Columbia and debuted at number 10 on CFUV in Victoria. 2009 will see the band revisiting familiar places and moving into new territory, touring to Eastern Canada and beyond. PRESS Ronatron (Online music blog) '...the title track off her new album, 'Sea of Stars' and can only be described as epic. It was up-beat, melodic, and dramatic with a perfect ending. At one point in the night, Laura whipped out a white accordion for her song 'Break.' Who knew an accordion could be so cool? It actually made me want to go out and buy one, just for the sake of being cool... She has an undeniably enormous stage presence, especially for a small girl like herself. ...The entire band played with such vigour and passion, which was a great accompaniment to the heartfelt lyrics Laura had created. I could honestly picture each song being played on the radio, and I expect that will happen one day. ... There were so many layers to her song 'Such A Long Way To Go' that it's hard to describe it all in detail, but I was especially impressed by the horn outro that made the crowd jump to their feet. It was one of the many highlights of her set, and when all was said and done, she received a standing ovation which led to an encore. .. you don't normally see many encores, but the crowd wanted more and that's exactly what they got.' Canwest 'Laura Smith's voice is rich with an undeniable passion for making music. The singer/songwriter and multi-instrumentalist is dripping with talent that's continuing to get her noticed -- clearly, she's an artist on the rise.' Monday Magazine (Victoria, BC) Local indie-pop artist Laura Smith's debut, Sea of Stars, opens with a catchy little pop ditty and moves quickly into more mature compositions. The album's title track, for example, is a swell-and-ebb riff that offsets Smith's sweetly-crooned vocals with some nicely developed tension. The bare-bones approach of 'Break,' which opens up with a lonely accordion and recalls the distinct flavour of old French B-movies, is another highlight. Sea of Stars is a lovely first release from an artist to watch over the next few years. Riveting Riffs (Online Magazine) 'Pop/Alternative Rocker, Laura Smith, a young Canadian singer/- songwriter...amped up the crowd with her explosive performance. Smith already has commanding stage presence, fabulous vocals and is a superb keyboardist. She is an excellent songwriter, whose lyrics are neither mundane nor trivial. Smith's repertoire includes thoughtful ballads and pretty poetry, and unlike some pop artists whose lyrics are often disconnected from the music, that is never the case with Smith's words. With a repertoire that easily segues across such a wide spectrum of genres, without sacrificing quality, one can only predict that Laura Smith has an incredible future ahead of her, not only on the Canadian music scene, but we should also be hearing more from her on the international stage as well.' by Joe Montague.

Here's what you say about
Laura Smith - Sea of Stars.