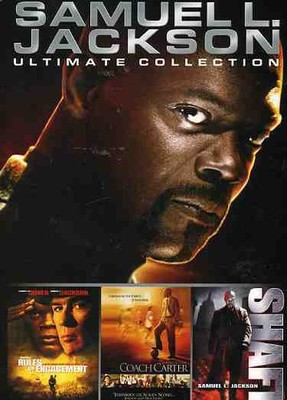 COACH CARTER: Academy Award nominee Samuel L. Jackson stars in the inspiring true story of controversial high school basketball coach Ken Carter, who benched his entire undefeated team for poor academic performance, in order to teach his players the importance of education. SHAFT: This action drama puts a new spin on Shaft, one of the key "blaxploitation" films of the 1970s. John Shaft (Samuel L. Jackson), the namesake nephew of the legendary private eye (Richard Roundtree), is a street-smart police detective who with his partner Carmen Velez (Vanessa L. Williams) has been assigned to a racially motivated murder case, in which a black college student was killed in front of a restaurant by Walter Williams Jr. (Christian Bale), the sociopathic son of a New York construction tycoon, who then fled the country rather than face prosecution. Diane Palmieri (Toni Collette), a waitress on a smoke break, saw the murder, but she doesn't want to talk to the police. Two years later, Walter is forced to return to New York, but without Diane's testimony, the city doesn't have much of a case. Soon, Shaft, Walter Junior, and Walter Senior's goons are all looking for Diane, with Junior enlisting the help of Peoples Hernandez (Jeffrey Wright), a small-time drug dealer who will do anything to move into the big leagues. Shaft and Carmen find Diane, but discover that she had a good reason for being on the lam for the past two years. Amidst all this activity, John gets frequent advice from his uncle, with whom he ponders the idea of quitting the force and opening a detective agency. Shaft was directed by John Singleton, from a screenplay by Singleton, Richard Price, and Shane Salerno. RULES OF ENGAGEMENT: Tommy Lee Jones and Samuel L. Jackson deliver electrifying performances in this "tense, superbly-directed and top-drawer drama"* about what happens when the rules that command a soldier become the rules that condemn him. Colonel Terry Childers (Jackson) is a patriot and war hero. But when a peacekeeping mission he leads in Yemen goes terribly wrong, he finds himself facing a court martial. Accused of breaking the rules of engagement by killing unarmed civilians, Childers' only hope of vindication rests with comrade-in-arms Hays Hodges (Tommy Lee Jones), a military lawyer of questionable abilities. Together, they face the battle of their lives. Directed by Oscar. -winning director William Friedkin and co-starring Guy Pearce, Bruce Greenwood, Anne Archer and Academy Award. -winner Ben Kingsley, Rules of Engagement is "a magnificent movie you must see. "* *Jeffrey Lyons, NBC-TV *Larry King, USA Today"

Here's what you say about
Samuel L. Jackson Ultimate Collection.