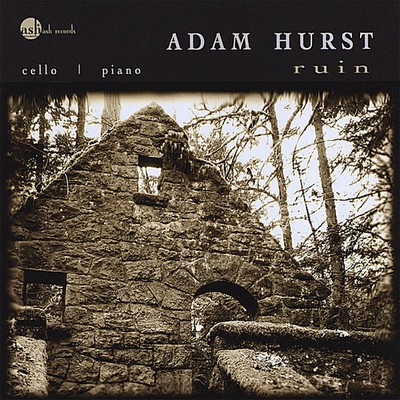 Poignant, subtle, passionate, soul moving, otherworldly. The music of Adam Hurst has been used in independent feature films, documentaries, and art films, and live choreographed ballet among others. He has performed his original music throughout the world. Mr. Hurst has released four CDs of original music. They have sold thousands of copies. His most recent CD, called 'Ruin' is evocative music for cello and piano. 'Dwelling' is a collection of thirteen 'poems' for cello and guitar. Music from his second album called 'Illusions' was used for an original dance piece. In 2007, Oregon Ballet Theatre's James Canfield choreographed a 20min ballet to a Hurst original composition which Hurst performed live at the premiere to a sold out crowd at the Newmark Theatre in downtown Portland, OR. REVIEWS: 'Though Adam Hurst's primary instrument is cello, his third and fourth releases show him to be an equally adept guitarist and pianist. On Dwelling and Ruin respectively, Hurst also proves himself to be a deft multi-tracker who records guitar and piano as base instruments over which his sinuous cello playing resounds. The two recordings are structurally similar with Hurst's preferred mode short, three- to four-minute classical settings of largely ruminative, sometimes ethereal character with all of the music composed by Hurst. He's no avant-garde provocateur hell-bent on extending the cello's sonic limits but instead an artist intent on bringing music of soul and romance into being. 'On Dwelling's thirteen cello-and-guitar "poems," Hurst alternates pieces pairing cello and acoustic guitar with others featuring multi-tracked guitars only. The prevailing mood is reflective and ruminative, though subtle contrasts emerge from one song to the next. "The Beyond" might be described as a dramatic Spanish guitar drone, while a faint country feel infuses the folk meditation "A Moment," and a faint hint of Ry Cooder even seems to emerge too. The cello's singing tone comes to the fore in "Dwelling" whereas "In-Between" highlights the melismatic character of the instrument's cry. 'The newer release Ruin follows Dwelling's lead with the obvious exception of the change in instrumentation. Again a melancholy spirit prevails (titles alone like "Alone" and "Face in the Rain" suggest as much, while "Death Waltz" is naturally somber) and Hurst largely opts for slow tempos throughout. The cello-piano combination is not only more contrasting than cello-guitar but the piano's cascades and arpeggios offer a richer and often lilting backdrop to the cello. Needless to say, Hurst 's cello playing on both recordings is beautiful-inflamed with emotion and passion but not overwrought (the cello melodies in "Exit" even exude a Byzantine quality that calls to mind John Tavener). Similarly, despite being melancholic in temperament, his elegant compositions are pretty but not saccharine.' -Textura.org, July 2008 'Cellist extraordinaire' -Eugene Weekly 'haunting and evocative' -Seattle Weekly '...hypnotic music' -The Oregonian (Marty Hughley) 'somber, ethereal tones' -The Post Star 'The masterful Adam Hurst bring works of crystalline beauty that can beappreciated in five minutes or savored for hours' -Someday Lounge '...soundtrack to a dream voyage...' -St. Johns Sentinel '...poetic music' -NW Professional Dance Project.

Here's what you say about
Adam Hurst - Ruin.