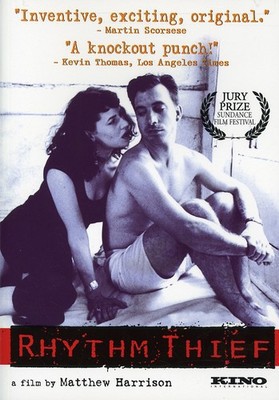 Jason Andrews (Last Exit to Brooklyn) is Simon, a New York City bootlegger who sells stolen music on the streets of Manhattan's Lower East Side. Ludlow Street chick Cyd (Kimberley Flynn, Michael Mann's Heat), who has a real job, meets Simon on week day mornings for sex. Life is good for Simon, until the day he rips off 1-900-boxx, a militant all-girl punk band fronted by real life rocker Cynthia Sley (of the Bush Tetras). The band comes after Simon, tromps his would-be sidekick Fuller (Kevin Corrigan, the Departed), and ultimately hounds him out of the city with Marty (Eddie Daniels, Bad Lieutenant), a girl from his past, in tow. After a period of exile in Far Rockaway, Simon is drawn back to the neighborhood for a final showdown. Director Matthew Harrison, one of the most exciting American independent filmmaking talents to emerge in the 1990's, began making films on the streets of New York City while still a kid. His first feature, Spare Me, a smash hit on the international film festival circuit, led to the immediate production of Rhythm Thief. Harrison's short films, such as Two Boneheads, West Side Evans, and Waking Up Crazy, won awards internationally. Based on his admiration of Rhythm Thief, Martin Scorsese served as executive producer on Harrison's acclaimed follow-up film. Kicked in the Head.

Here's what you say about
Rhythm Thief.