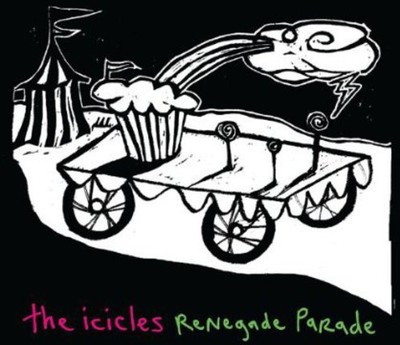 Perhaps it was just a hellacious sugar hangover. As the Icicles release their new Renegade Parade album, it seems that these cheery retro-futurist popsters are feeling a little less cheerful. "I begin to feel numb," sings lead singer Gretchen DeVault on the claustrophobic new song "Numb." "I am no longer young." That's quite a change in tone from the singer who just six years ago sang "I'm going to be greater than you thought I could be - and you won't believe it is me." It took buckets of chutzpa to sing those words, and the confidence paid off, because much of that song became reality with critical acclaim, international touring and big ad deals. But if 2004's "Rock and Roll Girl" turned out to be prophetic, the songs on Renegade Parade examine the consequences of having all your dreams come true. The Icicles have learned firsthand that success doesn't offer answers, only more questions and that even rocker girls (and guys) aren't immune from pressure and self-doubt. Hailing from Grand Rapids, Mich., the Icicles are fronted by singer/songwriter/guitarist Gretchen and her longtime musical partner, the ethereal keyboard alchemist Joleen Rumsey. Lead guitarist Rebecca Rodiguez, who joined for 2007's Arrivals and Departures, offers an increasingly emphatic reverb-drenched counterpoint to Joleen's spaced-out sounds. The band is joined on Renegade Parade by a new rhythm section - Zane DeVault and Aaron Ekins (making it a family affair - Zane is Gretchen's hubby and Aaron is her brother-in-law). With the new lineup solidified, the Icicles have embarked on a period of breakneck creativity, with fourteen songs recorded on their new album Renegade Parade. And even with the higher mope factor, the Icicles have not abandoned the spoonful of sugar approach to the bad things in life. Even as the music turns darker and examines more adult themes, the sounds have become more lush and beautiful, at that knife edge where beauty and sadness are joined. The band sounds less self-consciously retro and more au courant. The Icicles were founded by college pals Gretchen DeVault and Joleen Rumsey (along with original drummer Korrie Ottenwess) in 1999. Following 2001's Pure Sugar EP, bassist Emily Krueger joined the group. By the time of 2004's A Hundred Patterns, founding drummer put away her vintage Rogers drum kit and was replaced by Greg Krupp. That album's big single "Sugar Sweet" was picked up by Motorola in an international cell phone commercial. That was the Icicles' first flirtation with the big time. Next up was 2007's Arrivals and Departures, which features "La Ti Da" - a tenacious earworm that was used by Target in the mega-retailer's "Feel the Happy" campaign. As the Icicles close out their first decade of existence, the group remains a vital creative force. "Just need a space, a place where I can clear my head," Gretchen sings on "Would You Know." As the heebie jeebies of adulthood creep up, that space of clarity is still found most easily inside the music. And while "officially" released in March of 2012, life managed to get in the way of a proper release of Renegade Parade. The band experienced a bit of a baby boom with five babies born during the writing, recording and production of the album. So the Icicles are giving it some overdue attention by re-releasing it in February of 2013. Tempus Fugit. Time Flies. Ars longa, vita brevis. Art is long but life is short.

Here's what you say about
The Icicles - Renegade Parade.