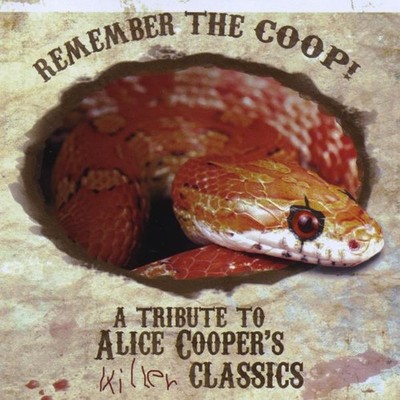 Before anyone knew who Vincent Furnier was, he fronted a band called Alice Cooper. Their fourth album, Killer, is considered by most to be their pinnacle, so we thought we'd give it the ol' Main Man treatment. That, of course, was narrow thinking on our part, because as soon as word got out that we were doing an Alice Cooper album tribute we were swamped with requests for inclusion. That led to a whole second disc of Cooper classics, so overflowing with love and respect that it is now the 'featured' disc while the Killer tribute is sort of a 'bonus'. Richard Barone's original band, The Bongos, used to play 'Hello Hooray' over the P.A. as they took the stage back in the 80s, so how fitting that he should record a version all these years later. Backed by none other than Frankenstein 3000, who shared the stage with Richard at our Queen Tribute CD Release Party, it's the perfect song to kick off the tribute. Also fitting is the appearance of Michael Bruce, original guitar player from Alice Cooper, who is backed by Dimma for two live cuts recorded in Iceland on Halloween in 2002. Another original Alice Cooper member, bassist Dennis Dunaway, joins Dimma on Killer's 'Halo Of Flies' while his daughters each contribute a song to the Killer disc. Other notable contributors include The Ribeye Brothers (covering a pre-Alice composition by Mr. Furnier's first band, The Spiders), Deena (Schoshkes of The Cucumbers) & The Laughing Boys, JISM (Tuff Darts), Well Of Souls (first new recording in over 10 years), Cooper disciples Dead Elvi and Sim Cain (Rollins Band), who plays drums on Scream's track. Some of Alice Cooper's greatest hits are here, like 'I'm Eighteen', 'Under My Wheels', 'No More Mr. Nice Guy' and 'School's Out', plus plenty of album cuts like 'Public Animal #9', 'The Ballad Of Dwight Fry' and 'Muscle Of Love'. 28 tracks in all; nearly 2 hours of music!

Here's what you say about
Various Artists - Remember the Coop: Tribute to Alice Cooper / Various.