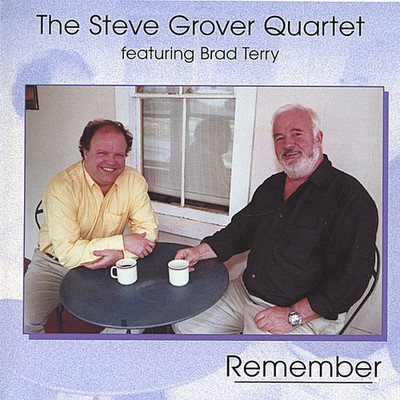 Remember (I'M 2016) is led by award winning jazz composer and drummer Steve Grover. It features a quartet of Brad Terry, clarinet; Frank Carlberg, piano; Chris Van Voorst Van Beest, bass; and Steve Grover, drums in a program of nine originals. The music is melodic, modern, swinging, reflective, joyful. In 1994 Steve Grover won The Thelonious Monk Institute of Jazz/BMI Jazz Composers Competition. In 1996, Steve was a winner in JAZZIZ Magazine's 'Percussion On Fire' talent search. Steve has released a total of 5 CDs to excellent reviews, most of which are available at CD Baby. Clarinetist Brad Terry has recorded with Roger Kellaway, Red Mitchell, and Jarek Smietana, among others. His recordings with guitarist Lenny Breau, 'The Living Room Tapes', are widely acclaimed. Other CDs include Brad Terry Plays Gershwin, Colorado, and All About Spring. Pianist Frank Carlberg, a Brooklyn resident, is a highly creative musician whose excellent CDs are available on the Fresh Sound New Talent label. Bassist Chris Van Voorst Van Beest is one of the most in-demand bassists in the NYC area. He lives in Brooklyn. Reviews of 'Remember': 'In the stimulating settings of Steve Grover's compositions, Brad Terry is stimulated to dig deep into his improvisational resources. Grover's pieces do not adhere to conventional forms or harmonies. They disclose a writer with a distinctive style and a personal voice.' - Doug Ramsey "This is one of those records that would get a lot more attention if it was on a major jazz label. It is intelligent and original music."-Cadence "Grover has written a book in musical form with each track a chapter and the performers as it's characters. Remember retains one's interest from first track to last and is recommended."- Dave Nathan, AMG Guide "Throughout this disc, these musicians exude a warmth for and understanding of each other that controls the mood of the music... The theme is a constant exuberance meted with the wisdom of past struggles. With Remember, Steve Grover has crafted a very personal and very enjoyable album."- The Portland Phoenix Excerpts from the Liner Notes: This original music represents a personal aesthetic with regard to the form of jazz composition, with a strong emphasis on melody and harmony. There are few arrangements framing the song forms. About the Musicians: Brad Terry is a musician of great depth and versatility. I met Brad on a gig in 1974, and we started working together teaching and playing in 1980. To prepare for recording this album, I made tapes for Brad, and scheduled some rehearsal time. He learned each tune in this way, until it became part of his personal musical language. Brad has a beautiful clarinet sound, warm and equally satisfying in all registers, masking his wonderful technical ability with a lyrical, conversational style. He makes it sound easy, but such musicianship can come only after many years of playing experience. Frank Carlberg transcends all of the cliches of modern jazz piano, while still sounding grounded and swinging. With Frank, every note counts. Chris Van Voorst Van Beest has a strong beat, huge ears, and great taste. You'll be hearing a lot from him in the 21st century! Steve Steve remembers things a lot better than I do, but we go way back to the old Sunday sessions at the Warehouse. I've watched with admiration as he developed as a drummer, taught himself piano, and became a nationally recognized composer. He has remained a loyal friend and has put up with me as I try to do justice to his challenging music. I'm really honored to have had this opportunity to record these wonderful compositions with musicians the caliber of Frank, Chris, and, of course, Steve. Sincerest thanks, Young Grover. Brad Terry.

Here's what you say about
Steve Grover - Remember.