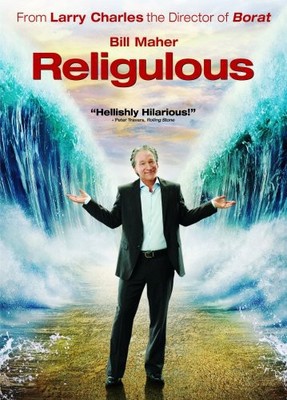 Bill Maher travels to Israel, England, the Netherlands, Vatican City, and across America, speaking to people about faith and religion in the very funny documentary RELIGIOUS. Maher, a stand-up comedian who has hosted the talk shows POLITICALLY INCORRECT on ABC and REAL TIME on HBO and has written such bestsellers as DOES ANYBODY HAVE A PROBLEM WITH THAT? and WHEN YOU RIDE ALONE, YOU RIDE WITH BIN LADEN, reaches out to religious leaders as well as regular folk on the street, discussing the existence of God and the importance of organized religion. Maher makes it clear from the start that he is not a fan of religion and does not believe in God, and he has fun skewering people who do-including Christians, Jews, Muslims, and Mormons, rabbis, priests, politicians, scientists, evangelical ministers, and even a preacher whose church is a converted truck. Starring Bill Maher Director Larry Charles Special Features: Widescreen, 1.85 Audio: Dolby Digital 2.0, Dolby Digital 5.1, English Subtitles, English, Spanish Additional Release Material: Deleted Scenes Audio Commentary: 1. Bill Maher, Larry Charles Running Time 101 Minutes.

Here's what you say about
Religulous.