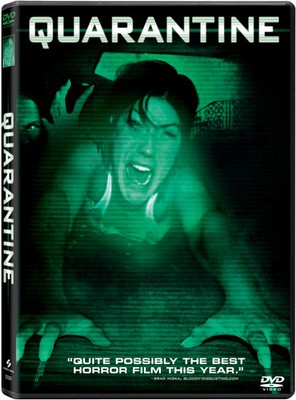 A faithful adaptation of the 2007 Spanish film REC, QUARANTINE chronicles the outbreak of a rabies like disease in a Los Angeles apartment building and the struggle of the unaffected residents to stay alive after the authorities trap them inside in an effort to contain it. Equal parts BLAIR WITCH PROJECT and 28 DAYS LATER, the film is presented through the eye of a video camera, putting the audience in the middle of the action and creating a heightened level of intensity and realism. Television reporter Angela (Jennifer Carpenter) and her cameraman, Scott (Steve Harris), are covering the goings-on at a firehouse for a program about night shift workers. As she clowns around with two flirty firemen (Jonathan Schaech and Jay Hernandez), an alarm sounds, and a truck is dispatched with Angela and Scott on board to an apartment building where an old woman has seemingly lost her mind. The woman bites one of the firemen and is soon killed, but when more tenants turn up with the same disorder, it's clear that a chain reaction is occurring. Director John Erick Dowdle Starring Jennifer Carpenter, Jay Hernandez, Steve Harris, Johnathon Schaech, Special Features: Full Frame, 1.33 Widescreen, 1.85 Audio: Dolby Digital 2.0, English, French Subtitles: English, French, Spanish Optional Additional Release Material: Audio Commentary John Erick Dowdle, Director; Drew Dowdle, Producer Running Time 89 Minutes.

Here's what you say about
Quarantine.