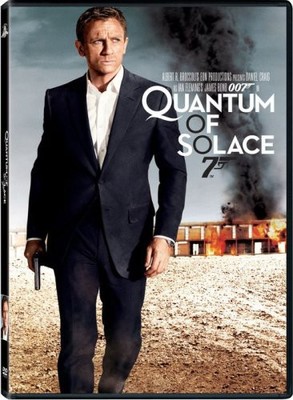 Daniel Craig returns as 007 in this electrifying follow-up to the critically acclaimed CASINO ROYALE. The film opens with two gripping, back-to-back chases, as James Bond (Daniel Craig) tries to heed the orders of M (Judi Dench) and, at the same time, track down the people who blackmailed his love, Vesper. Bond is still struggling with Vesper's death, displaying a new, ferocious violence in his work, and a recklessness that M would very much like to get under control. When Bond discovers a massive, secret organization called Quantum, he believes it might have been a part of the scheme that killed Vesper. He follows the clues to Haiti, where he meets Camille (Olga Kurylenko), a mysterious, driven woman, whose motives seem unclear. Camille leads Bond to Dominic Greene (Mathieu Almalric), a cold-blooded businessman who appears to be working within Quantum. Director Marc Forster Starring Daniel Craig, Olga Kurylenko, Mathieu Amalric, Jeffrey Wright, Special Features: 2-Disc Set Region 1 NTSC Keep Case Special Edition Anamorphic Widescreen, 2.40 Audio: Dolby Digital 5.1, French, Spanish Dolby Digital 5.1, DTS Surround 5.1, English Subtitles - English, Spanish Runtime: 107 Minutes.

Here's what you say about
Quantum of Solace.