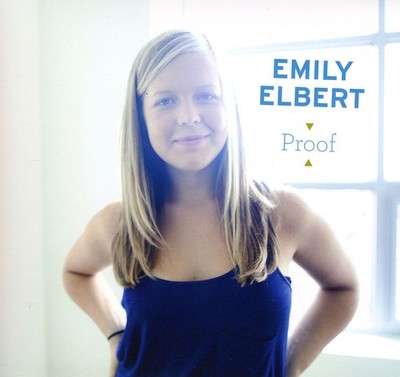 Emily Elbert's second album, Proof, builds on the jazz-folk foundation that fans love, and adds new twists with elements of r&b, rock, and world music. The album features students and alumni from Berklee College of Music in Boston, who hail from throughout the U.S., and from Brazil, Israel, Japan, and India. Proof also features cellist Eugene Friesen and Emily's father, Roland Elbert, on piano. Emily was raised in Texas on a musical diet of Antonio Carlos Jobim, James Taylor, and 60's radio. After years of studying classical piano, she fell in love with guitar at 15, and began writing songs soon after. As a high school junior, she released her debut album, Bright Side - comprised of all original material, co-produced by Emily. Before graduating, the third-generation professional musician was named Local Rookie of the Year by The Dallas Morning News and won first place in the Texas 10 Under 20 contest. She also earned a coveted spot in the Gibson/Baldwin Grammy Foundation's jazz ensemble, and began her studies at Berklee in 2007. Now at 21, Emily has played over 300 shows, from Alaska to Memphis, Hollywood to New York City, Austin to Maine, and Scotland, Puerto Rico, Peru, and Saint-Barthélemy. She has opened for artists as diverse as Richie Havens, Janis Ian, G-Love & Special Sauce, Kaki King, Patty Larkin, Kate Voegele, Jonathan Edwards, and Roger McGuinn. Music lovers have watched her YouTube videos in droves, including over 250,000 views of her version of Michael Jackson's "Thriller." In 2008, WUMB-FM Radio in Boston named Emily Best New Artist of the Year.

Here's what you say about
Emily Elbert - Proof.