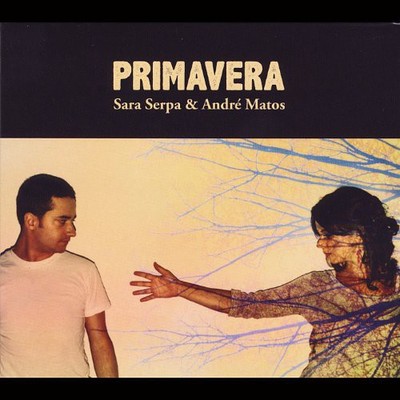 Warmth, freshness, color, growth, new beginnings - these aspects of spring inspired and resonate in Primavera, the first duo album from vocalist Sara Serpa and guitarist André Matos. It's an album they started last spring and are releasing this spring, with the arc of it's making also following the gestation and birth of their first child. To be released April 25, 2014 via Inner Circle Music, Primavera is a creation of verve and atmosphere, melody and poetry. The album also sees Serpa and Matos take a different, multi-layered tack from their usual jazz-honed method; they play multiple acoustic and electric instruments and use the studio as an instrument. Several musical friends help enrich Primavera, including Greg Osby, who adds soprano saxophone to a track. The material ranges from the duo's artfully inventive originals to a classic tune by pianist Ran Blake & vocalist Jeanne Lee ("Vanguard") and a song by Argentine composer-pianist Guillermo Klein ("Se Me La Va Voz"). Along with Serpa's signature wordless vocalese and her lyrics in Portuguese and English, there are songs that use words by two great poets: the American e.e. cummings and Portuguese Fernando Pessoa (via his heteronym Alberto Caeiro). Inventive and inviting throughout, Primavera is as irresistible as the season for which it's named. JazzTimes has called Serpa "a rising star," while All About Jazz has said: "Her unique style of vocalese allows her to utilize the full range of her exquisite and clear voice with the agility of an instrumentalist, standing out of the crowd as a sublime interpreter and a bold improviser." The New York Times has described Matos as a guitarist who "advances a pointedly contemporary air." Both born and bred in Portugal but based in New York City for half a decade-plus, Serpa and Matos met through music in Boston, where they both studied at the Berklee College of Music and New England Conservatory. Primavera is an album of connections, musical and personal. The song "Vanguard" reflects the close relationship Serpa has had with Ran Blake since she studied with the iconic pianist at NEC. She and Blake have recorded two albums together, 2010's Camera Obscura (which also included a version of "Vanguard") and 2012's Aurora. "We wanted to pay tribute to Ran, who is a dear friend," Serpa says. "I love the melody of that song and Jeanne Lee's lyrics, which were inspired by Dostoevsky's Dream of a Ridiculous Man." Composer Guillermo Klein is another friend and influence to the duo - his "Se Me La Va Voz" got "stuck in my mind after I heard him playing it at the Village Vanguard," Serpa recalls. "It's sad and deep." The appearance of Osby on Primavera reflects the fruitful association Serpa and Matos have with the sax star, who has "been very important to us since we've been in New York," says the guitarist. Serpa joined Osby's band right out of school in 2008, performing with the group at such hallowed venues as the Village Vanguard and contributing to his album 9 Levels. Osby's Inner Circle Music label released Serpa's debut album as a leader, Praia (2008), and her quintet album Mobile (2011), along with Camera Obscura. Inner Circle also released Matos's third album, Quare (2010). On Primavera, Osby's serpentine saxophone darts between Serpa's vocalese and Matos' six-string on the guitarist's tune "Choro." Matos has known Leo Genovese - a pianist who plays everything from piano and melodica to exotic percussion and toy guitar on the album - since their Berklee days together. "He adds color and spontaneity to the mix," Matos says. Pete Rende, who contributes keyboard atmosphere to the background of Matos' "Caminho" is a "special voice in music, a piano player we admire a lot," the guitarist says. "He did a great job mixing the album for us and sitting in on Prophet for 'Caminho.'" The original compositions by Serpa and Matos glow with a kind of magical lyricism. On an album full of highlights, the joyous title song and reflective "Tempo" stand out, as does "Caminho" with it's luminous ambience and quietly dramatic guitar solo. The stately, lovely "A Realidade das Coisas" is one of the album's two settings of verses by the great poet of Lisbon, Fernando Pessoa, writing as Alberto Caeiro, one of his many literary alter egos. These are part of a larger cycle of Pessoa/Caeiro settings by Matos. Then there is the impossibly catchy "Kubana," rhythmically demonstrative and melodically sighing by turns. "This album came out very different from what we initially expected - we had planned a straightforward acoustic duo record at first," Serpa says. "But as we became more and more involved in the music, we experimented and got excited about the process and what we were creating, with new songs being born in that process of discovery." Any listener can hear that the final result, Primavera, radiates with that excitement of experimentation and the joy of creative communion.

Here's what you say about
Sara Serpa - Primavera.