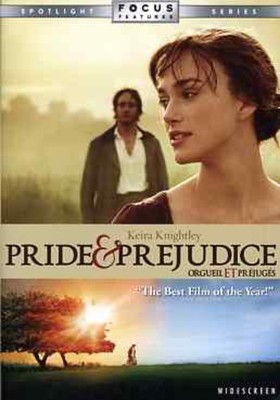 One of the greatest love stories of all time, Pride & Prejudice, comes to the screen in a glorious new adaptation starring Keira Knightley. When Elizabeth Bennett (Knightley) meets the handsome Mr. Darcy (Matthew MacFadyen), she believes he is the last man on earth she could ever marry. But as their lives become intertwined in an unexpected adventure, she finds herself captivated by the very person she swore to loathe for all eternity. Based on the beloved masterpiece by Jane Austen, it is the classic tale of love and misunderstanding that sparkles with romance, wit and emotional force. Direction: Joe Wright Actors: Brenda Blethyn, Carey Mulligan, Claudie Blakley, Donald Sutherland, Jena Malone, Keira Knightley, Rosamund Pike, Talulah Riley Special Features: A Bennet Family Portrait; Jane Austen, Ahead of Her Time; Behind-the-Scenes at the Ball; Feature Commentary with Director Joe Wright; Pride & Prejudice: HBO First Look. 2.35:1, Anamorphic16x9, Widescreen format. Language: English / Add. French, Spanish / Sub. English, French, Spanish Year: 2005 Runtime: 129 minutes.

Here's what you say about
Pride & Prejudice.